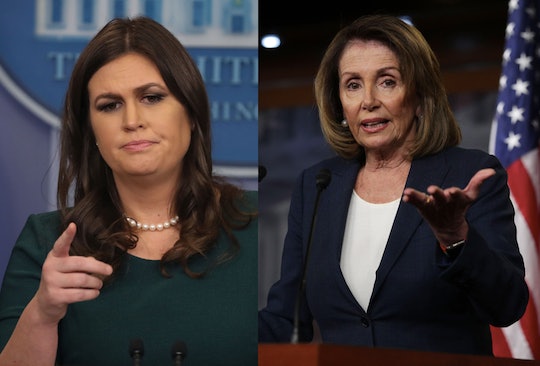 Don't you just love being a woman and having total standers let you know their opinions on everything you do? Ah, yes. It's the best. And when you're a woman in the public eye, you get pretty used to having people tell you their unwanted opinions. So when Sarah Huckabee Sanders said that Nancy Pelosi should smile more often, it was just a matter of time before Twitter started roasting her for it. Because, really, does the world need someone else telling women what they should do? Spoiler alert, the answer is no, obviously.

Now, in case you aren't exactly sure what this whole smiling business is about, allow me to fill you in. Tuesday night was President Donald Trump's first State of the Union address. It had drama, misleading statements, and a whole lot of awkward clapping. But at one point during the night, the camera panned to House Minority Leader Nancy Pelosi, a Democrat from California, while Trump was speaking. And while many people in the audience were smiling or clapping (mostly Republicans, that is), Pelosi's face was almost expressionless. Almost immediately, people on Twitter began to take notice and call out Pelosi for not smiling. Because, ya know, if a woman doesn't constantly smile she's obviously pretty nasty.

Sitting down with CNN's Chris Cuomo on his show New Day Wednesday morning, Sanders discussed the moment Pelosi didn't smile. "I think Nancy Pelosi looks like that all the time. I think she should smile a lot more often. I think the country would be better for it."

Yeah, I'll let that sink in for a moment. That is a legitimate White House official saying that a female member of Congress — who has been serving as the House Minority Leader for about seven years — should look a certain way to please others. Now, besides being blatantly sexist, Sanders' comments are also incredible hypocritical. She should know better than anyone that being a woman in the public eye gets you a lot of unwanted remarks, some of which are just plain mean.

I mean, come on, y'all. Sanders is also in the public eye quite a bit, and she doesn't smile all the time. Why is she calling on Pelosi to do so?

To clarify, this is the moment that had so many Twitter users up in arms:

I don't know about you, but I've definitely made that exact same face plenty of times. It has a (sexist) name. Resting b*tch face. And, sexist name aside, women look unhappy and pissed sometimes, and they're allowed to. But Sanders' comments still led conservatives to rally behind her.

After all, just look at some of the responses right-winged Twitter users had to Pelosi's refusal to smile during Trump's speech:

I mean, I don't really understand why it matters whether Pelosi smiled during Trump's speech. After all, he was making a number of false and racially-charged statements Tuesday night, so why should a smart, independent, Democratic woman have to smile if she's not happy about that?

While there were, of course, plenty of trolls out there telling Pelosi to smile more, there were also some good civilians trying to stand up for her, because women don't need to look a certain way just to please others — especially when looking happy wouldn't accurately reflect how they actually feel.

Sanders also said Pelosi's non-smiling face was actually the perfect mascot for the Democratic Party. "She seems to kind of embody the bitterness that belongs in the Democrat party right now," she said, according to The Cut. Obviously, Sanders hasn't taken a course in feminism, or she would know that telling women how they ought to look is kind of a big no-no.