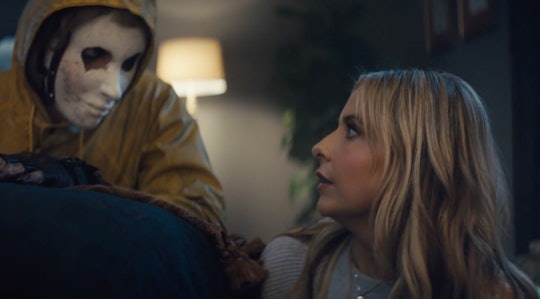 If, like most teen girls in the late 90s, you were completely enthralled by Buffy The Vampire Slayer star — and teen horror film fixture — Sarah Michelle Gellar, then you may unfortunately be at an age where you might find yourself needing a little extra help from some anti-aging skincare. And while that may not be the most uplifting reality, Olay has at least helped soften the blow by recruiting our beloved SMG to make one seriously clever ad full of hearty millennial nostalgia. In fact, Sarah Michelle Gellar's Super Bowl commercial is so entertaining, you can *almost* forget that parenthood and mortgage payments have zapped your carefree youthful glow.

Olay tapped Gellar to star in its Super Bowl LIII commercial, "Killer Skin," according to People, and given her starring roles in throwback teen films like Scream 2 and I Know What You Did Last Summer, it's clearly a casting match made in heaven. But the ad itself is also really funny.

In the spot, Gellar is stuck running for her life when a Scream-style masked intruder enters her home, but when she tries to call for help, her Olay-rejuvenated skin is so lovely that her phone's facial recognition technology simply won't recognize her (where's a rotary phone when you need one?). In fact, the results are so impressive that even the killer can't help but comment. As he comes crashing into the room, he quips, "your skin is glowing. You could be a movie star."

It may not exactly be the scary movie comeback we've all secretly been pining for from the star since we were 14, but it *is* still pretty great to see Gellar back on the screen.

If you've been following the actress on social media, you may have already seen her tease the clip among other life updates (including those with hubby Freddie Prinze Jr., the other half of the ultimate 90s relationship goals couple), and judging by the social media reaction to the ad, it's pretty clear Gellar is still the queen of all of our hearts:

As for the ad itself though? Gellar told AdWeek that she thought "the concept was really fun and just such a great twist," and that when she read the script, she thought, "Oh, my god, this is going to be the kind of commercial that people remember and talk about the next day."

But on Instagram, Gellar also acknowledged that having the chance to star in a Super Bowl ad felt particularly important to her as a woman. In the caption of another teaser clip, she wrote:

I'm really excited to be representing @olay at #sbliii considering that while 45% of NFL fans are women, only 27% of #superbowlads star women. I'm proud to change that narrative.

Though it unfortunately doesn't appear as though the ad was a sign that she'll be returning to her rightful place on our screens in any upcoming horror films, Deadline did reveal earlier this month that she will be appearing in the upcoming television adaptation of Sometimes I Lie, the debut novel from writer Alice Feeney. In the show, Gellar will play Amber Reynolds, a woman who wakes up in a hospital to find herself paralyzed and unable to communicate with those around her, who have no idea that's actually able to hear them, as Deadline explained.

Until then though, we still have Gellar's social media pages, which are actually full of amazing throwback photos and clips, including this gem from I Know What You Did Last Summer:

Or this too-incredible-for-words photo of Gellar posing with the cast of Dawson's Creek, in the ultimate 90s #TBT:

But of course, if there's anything Gellar's Olay Super Bowl ad has proven, it's that she's totally still got it. And that the world needs an SMG-led Buffy The Vampire Slayer reboot immediately.