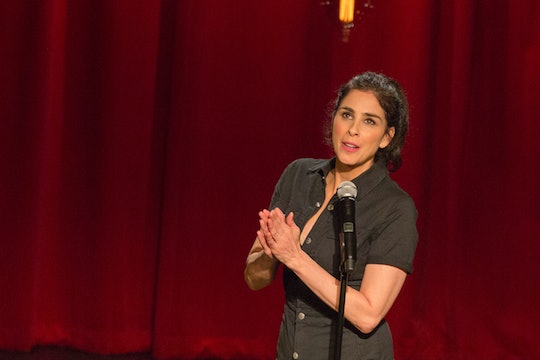 Sarah Silverman Says You Have To Be Political Now

Sarah Silverman has never been shy when it comes to politics. In fact, anyone who has ever visited her Twitter account knows this for a fact. So it shouldn't come as much of a surprise to learn that the comedian raises numerous political issues in her upcoming Netflix original stand-up special, Sarah Silverman: A Speck of Dust. But that's not just because the current administration feels like one big punchline at the moment — it's also because Silverman feels a certain responsibility to use her platform for the greater good. In fact, Silverman believes that being political is no longer an option for the general public. It's a downright necessity.

"I think that the days of anybody saying ‘I’m really not political’ are bullsh*t," Silverman told reporters at a Netflix press junket. "If you were someone to have the nerve to say that today, you are complicit in what’s going on. And if you’re watching The Handmaid’s Tale it’s like — you better f*cking speak out for every single person you see not being spoken for because these are crucial, crucial times." Whether this involves protesting against the lifting of transgender bathroom protections in schools or the defunding of Planned Parenthood, Silverman urges the public to speak out and resist the current administration.

"We’re so divided and being divided makes us very easily controlled," she states. "It’s very important for people to cling together no matter how unlike-minded we are, if possible."

As is common when celebrities are vocal about politics, Silverman receives a lot of backlash from some fans who simply want her to "stick to entertainment," believing that comedians should have no say in political discussions. But intimidation just isn't in her vocabulary. Her social media is littered with a vast array of political content, though if she ever ends up passing something along that turns out not to be entirely true, she makes a point of correcting any fake news she unintentionally may have passed along. "I’m not looking to fit a narrative," Silverman explains. "I am on a quest for the truth in a time when truth literally has no currency, even in [media]."

While Silverman's entire comedy special won't center around politics, she will touch on it. And she will undoubtedly continue to use her public platform to not only entertain her fans, but educate them as well — regardless of anyone's race, gender, or political party.

"We’re all the same," Silverman states. "We’re the product of how we were raised, so if we can be open to being changed by new information, that’s the only way that we can expect other people to change." Ideally for the better.