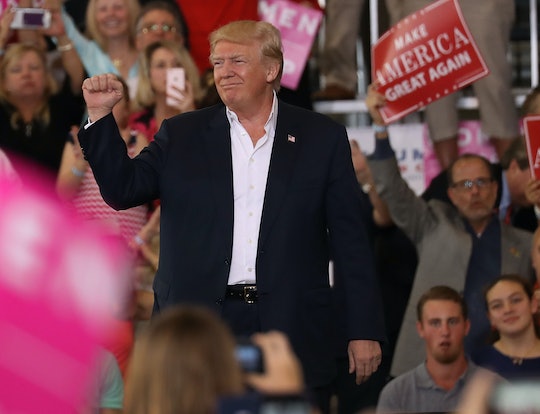 Is It OK To Call Donald Trump "Mentally Ill"?

Fueled by two competing New York Times op-eds published this month, a debate among mental health professionals has been raging about whether it's ethical for them publicly diagnose the president with personality disorders, signs of which many of them believe he exhibits. Some believe labeling Donald Trump as a narcissist, for example, is an essential public service; Others are convinced that doing so wrongly further stigmatizes people who do live with mental illnesses. But as the professionals hash it out, one thing is for sure: Saying Trump is "mentally ill" when you're not an expert is armchair diagnosis at its very worst, and has no place in political discourse.

First, the op-eds. Last week, The Times ran a letter signed by 35 "psychiatrists, psychologists and social workers" who banded together to lend clinical credence to the oft-repeated sentiment that Donald Trump is unfit to be the most powerful man in the world. "Mr. Trump’s speech and actions demonstrate an inability to tolerate views different from his own, leading to rage reactions," they wrote. "His words and behavior suggest a profound inability to empathize. Individuals with these traits distort reality to suit their psychological state, attacking facts and those who convey them (journalists, scientists)."

And then, swiftly, came the rebuttal — although it was no more pro-Trump than the one denouncing him. Dr. Allen Frances, a Duke University professor emeritus of psychiatry who also played a major role in defining narcissistic personality disorder for the a now-outdated version of the Diagnostic and Statistical Manual of Mental Disorders, weighed in to say that he does not believe Trump meets the criteria. He wrote that Trump's "grandiosity, self-absorption and lack of empathy," have inflicted distress on others, not himself. And a true personality disorder must cause "clinically significant distress or impairment in social, occupational, or other important areas of functioning," according to the DSM, as NBC News reported.

But, in Frances' view, that isn't the only problematic aspect of diagnosing Trump. He elaborated:

It is a stigmatizing insult to the mentally ill (who are mostly well behaved and well meaning) to be lumped with Mr. Trump (who is neither) ... Psychiatric name-calling is a misguided way of countering Mr. Trump's attack on democracy. He can, and should, be appropriately denounced for his ignorance, incompetence, impulsivity and pursuit of dictatorial powers.

But that's a debate for the professionals, whom the American Psychiatric Association technically prohibits from publicly diagnosing a person with a mental disorder if they have not personally examined them and obtained the patient's consent to speak about their conclusions publicly. But for the general public who aren't practicing psychiatrists or therapists, what's the harm in tweeting or Facebooking about the mental disorders that may or may not plague the president?

Well, doing so serves no real purpose in terms of fighting Trump's decidedly dangerous agenda, and, as Frances wrote, does stigmatize the mentally ill.

Professionals who signed a Change.org petition which states that "Trump manifests a serious mental illness that renders him psychologically incapable of competently discharging the duties of President of the United States," could arguably have reason to want him removed from office. But when the average Joe or Jane uses Trump's suspected mental state to build an argument that he shouldn't be in power — lacking any true evidence that he experiences any mental illness — the label of "mentally ill" is reduced to a derogatory term used to discredit a person with whom they do not agree. Trump's constant lying, poor impulse control, and inability to consider opposing viewpoints may very well merit his detractors' disdain, but pairing that with accusations that he has a mental illness serves no purpose other than to wield the label as an insult.

And, on the other end of the spectrum, calling Trump mentally ill simply by observing him, with no real psychology training (and, no, your 101 class in college does not count), affords him a benefit of the doubt that he does not necessarily deserve. "Psychiatrically labeling our leaders," Weill Cornell Medical College professor of psychiatry Richard A. Friedman wrote in yet another New York Times op-ed, "... lets them off the moral hook." He continued:

Not all misbehavior reflects psychopathology; the fact is that ordinary human meanness and incompetence are far more common than mental illness. We should not be in the business of medicalizing bad actors.

It's an argument that's hard to argue with, whether you like Trump or not. The president's supporters, of course, are unlikely to explain his behavior in clinical terms. And for those who are outraged by his poorly thought-out executive orders and his obsession with the size of his inauguration crowd, for example? Absent incontrovertible proof of a medical condition that could explain the man's erratic, unpredictable, seemingly immoral and deeply troubling behavior, Trump should be held personally responsible for his words and actions. There's certainly no reason to to place the blame for the fallout of each of his outbursts elsewhere.

So, leave the diagnosing to the professionals. When not even they can agree on how to react to Trump, it's definitely best for the armchair psychiatrists to just take the day off.