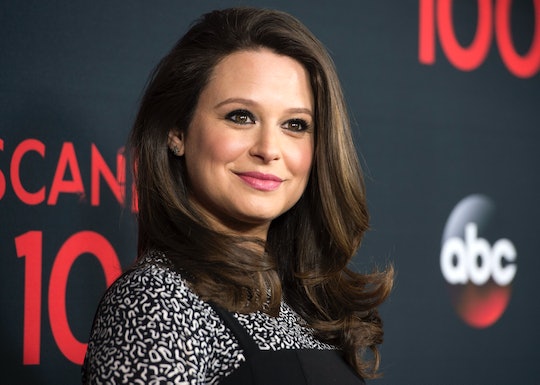 Scandal's Katie Lowes and her husband, actor Adam Shapiro, announced their first pregnancy back in May, and judging by her recent interview with Fit Pregnancy, Lowes knows a thing or two about this whole parenting thing. It's beyond obvious that she's excited to welcome a new little being — a baby boy — into the family. She also revealed that she's terrified about going into labor. And although she knows the sex of her baby, the Scandal star was quick to note in her interview, Lowes doesn't know what gender her son will identify as in the future. Not only is this answer just wonderful, but it's also a good reminder that the pink or blue balloons we celebrate with at birth shouldn't dictate how we raise our kids.

My husband and I are aware, of course, that our son will be born with male parts. But we have no idea what he will identify as or what his sexual orientation will be. I wish, now more than ever, to just please let my son be healthy and happy and safe. That’s all that matters.

Most parents would probably put their children's health, happiness, and safety above all else — but Lowes' quote goes above and beyond the usual "It's a boy!" or "It's a girl!" announcement that often accompanies pregnancies.

Far too often, kids are raised with gender norms almost as a matter of fact: as soon as parents know whether they're expecting a baby girl or a baby boy, certain toys are bought (Barbies or Legos?), clothes are gifted (tutus or baseball caps), and behaviors are adhered to. Girls are taken to dance classes while boys play sports, and boys are taught to fix their bikes while dads repair their girls' automatically. A lot of unconscious programming goes on once babies are decked out in either blue or pink clothes.

Lowes' answer demonstrates an awareness that all parents — and all of society, really — should try and tune into more frequently. A child's assigned gender at birth doesn't determine the gender or sexuality they actually identify with. And according to Reuters, research so far has generally hinted that our sexual preferences and gender identities have a biological origin.

By being aware to the fact that she can't know yet what her son's sexual orientation and gender identity will be, Lowes isn't — as many conservative writers might argue — attempting to steer her child towards homosexuality or towards a female identity. What she is doing, however, is giving her son the space and unconditional acceptance to become himself, whoever that may be.

"A major pro to raising a gender-neutral baby is that you will be allowing your child to develop without the artificially created limitations that society has placed around gender," Israel Martinez, a licensed clinical social worker, told Parents. And although those limitations affect all children, in a way, they especially limit children who may not identify as cis-gender and straight, despite being raised with those norms.

By having narrow definitions of what a child must be like or act like as a boy or girl, those who don't fit into those boxes can feel like they need to hide — and no parent wants their child to live a life that's not authentic. Being open doesn't mean pushing your child in one direction or another. Instead, it's about removing the false barriers that gender stereotypes put on children and letting them discover, for themselves, what they do and don't enjoy.

Kudos to Lowes for the reminder that the pink or blue balloons that escape a baby's gender reveal box have nothing to do with who that baby will grow up to be later on in life.