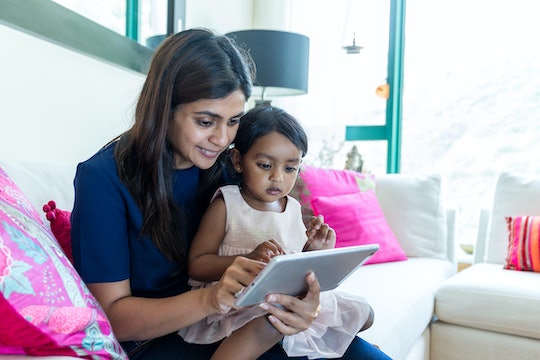 Every time one of my sons looks at a screen I'm pretty sure I've failed as a mother because this is what I thought I was supposed to think. Everyone tells me that screen time is terrible, from scientists to teachers to that one mom friend who is better at everything. It turns out maybe those people were wrong. Science says screen time might not be as bad for kids as we first thought and I can't wait to tell that mom friend she doesn't know everything.

A new study by British pediatricians released by the Royal College of Paediatrics and Child Health (RCPCH) in the United Kingdom recently looked at the scientific likelihood of screen time having a negative effect on kids. This is far from the first study to look at how screens are affecting our children considering how prevalent screens are in our everyday lives. Most recently a study performed by the National Institute of Health found that more than two hours a day looking at screens could cause lasting damage to a child's brain, as per CBS News. And the American Academy of Pediatrics strongly recommends that toddlers avoid screens altogether (which is a whole lot easier said than done, as anyone with a toddler would certainly tell you).

This new study by British pediatricians found different results... as in, screen time in itself is not bad for your child's health.

Now before everyone loses their mind and starts to argue that of course screen time has an effect on kids, hear me out. This study looked at the possibility that screen time can be scientifically linked to having an adverse affect on children and found there was little evidence to empirically suggest this distinction could be made. As the scientists behind the study wrote in a press release:

There is not enough evidence to confirm that screen time is in itself harmful to child health at any age, making it impossible to recommend age appropriate time limits.

This directly flies into the face of previous research that has linked screen time use to obesity, struggling to focus in school, and mental health issues. But Dr. Max Davie of the Health Promotion for the Royal College of Paediatrics and Child Health noted that the issue at hand is encouraging parents to learn to build screen time around their family life:

Studies in this area are limited but during our research analysis, we couldn’t find any consistent evidence for any specific health or wellbeing benefits of screen time, and although there are negative associations between screen time and poor mental health, sleep and fitness, we cannot be sure that these links are causal, or if other factors are causing both negative health outcomes and higher screen time.

The reality is, screens are simply a part of our lives now. And as children grow they will become more and more invested in their screens. As this study concluded, perhaps parents should just try to come up with realistic guidelines for incorporating screens in their home life without having the specter of permanent damage to their children hanging over their heads.