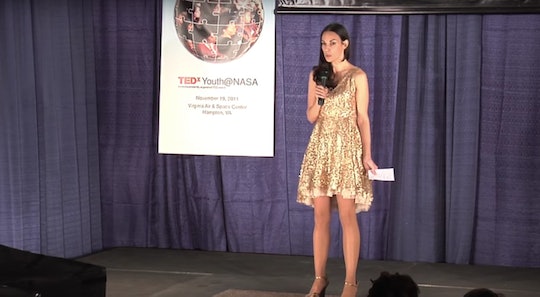 Shiny sequins and professional lab coats can, indeed, go hand-in-hand. And that was the inspiring message a scientist wearing a sparkly dress during a NASA speech gave to a room full of children listening to her to expertise while in a fun and glamorous get-up. Rita J. King wanted the girls in the group to see that sparkles and science are not an either/or situation — you can have both.

King is the co-director of the Science House in New York City as well as an author, a futurist (a scientist who collects data to decide different potential future outcomes and how to get there), and a designer. She's someone who's grown comfortable combining her two great passions — science and art — and hopes to inspire young girls to realize that they can do the same thing. That they don't have to choose between science and beauty, which is why King wore a sparkly dress to a speech she gave at NASA.

King wanted the girls to react to her message, which she tells Romper is "a serious one about applying imagination to problem-solving at a time when kids are growing up into broken systems, including climate change and connected devices making predictions about them."

The speech was actually given back in 2011 at the National Institute of Aerospace in Langley, Virginia, though King was inspired to share the moment on Twitter recently. "Cleaning out my closet, I came across this gown and remembered the little girls who sent me a letter and asked me to wear something sparkly for a talk I gave at NASA so they could believe that scientists could also be sparkly," she explained in a tweet.

King tells Romper that she wore the sparkly dress in an effort to show connect with her audience in a real, emotional way, explaining that she believes: "Sequins are like sun shining on the surface of the sea. The real power is under the surface. This is true no matter what's on the surface."

As she tends to wear "black slacks, a black shirt, a black blazer, and flats" when meeting with clients, King says her gold sparkly dress was a change for her. But it was a change that could make the difference in the life of a girl who might have believed she had to choose between two sides of her personality. As one mom wrote to King on Twitter, "My daughter is obsessed with all things sparkly, and she also likes to use tools and tinker. I love that she can see women like you!"

Wearing a sparkly dress while talking about being a futurist is exactly the sort of thing young girls need to see. There still are not enough girls going into STEM (science, technology, engineering, and math) careers, according to a report conducted by the American Association of University Women, and the accepted wisdom appears to be that they just don't see enough women in those fields. And that's exactly why King has a message for the next generation.

"We live in a society that is unaccustomed to women being more highly educated than men and unapologetically assuming positions of great public responsibility," she says. "I am an artist and scientist in equal measure. It's important to remember that we don't have to conform to an outdated standard of what professionalism is supposed to look like, but we should expect the transformation to be painful at times."

"This is why it's important to stick together, to give people room to grow and learn," King continues. "We are all works in progress. We all have the capacity to use our imaginations to solve problems, but we can't do it alone."

Sparkles and science living in harmony. This is a future I can get behind.