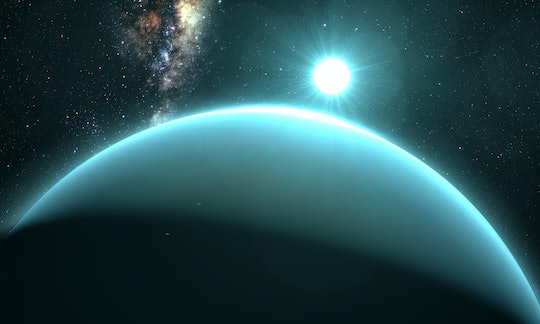 Parents, Get Ready For Your Kids To Crack Even More Fart Jokes Because Uranus Really Does Stink

Sorry parents, but you can't scold your kids for giggling about passing gas anymore, since some of the most distinguished researchers in the world made the ultimate fart joke on Tuesday. Yup, at the storied, very, very proper University of Oxford in the United Kingdom, scientists made an important discovery about Uranus recently. Drumroll, please....it turns out that Uranus smells like farts.

I mean, do we even bother doing more research in space or is this the pinnacle of all science, ever? If Bart Simpson, your 5-year-old, or I hate to admit it, my very respectable self, have anything to say about it — we should just quit while we're ahead. Because Uranus apparently smells like farts.

That's never going to get old, ever. I mean, who is the lucky elementary school kid that gets to present this unsavory news to their class during the solar system unit? I want to be there for that report. Sure, other planets are cool. There could be life on Mars one day, Saturn has all those rings, and Jupiter might have 69 moons (hey, now, let's not get crass), but Uranus smells like farts? It's bathroom humor and a "dad joke," all at the same time. We've peaked when it comes to intergalactic humor. We can all go home now.

It's Hard Not To Laugh

It smells like a particularly stinky fart, too. Scientists have long speculated that the planet was made up of either ammonia or hydrogen sulfide, but they never had any proof, according to Gizmodo. The Oxford scientists used a super sensitive telescope on Mauna Kea, a volcano in Hawaii, to look at the light bouncing off of Uranus. Different compounds cast different kinds of light, so the researchers could measure their wavelengths, according to a press release accompanying the study.

It wasn't an easy job, according to Patrick Irwin, one of the lead researchers. If it weren't for the great telescope or the perfectly clear conditions of Mauna Kea, they wouldn't have definitive proof that the upper atmosphere was made up mostly of hydrogen sulfide, which is the same compound that wafts off of rotten eggs. So, now we know.

Irwin said in the same release, "If an unfortunate human were ever to descend through Uranus’s clouds, they would be met with very unpleasant and odiferous conditions.”

It's also a silent but deadly fart smelling planet, adding injury to insult. Irwin noted in the release that humans would likely not make it up there anyway. "Suffocation and exposure in the negative 200 degrees Celsius atmosphere made of mostly hydrogen, helium, and methane would take its toll long before the smell,” he added. So, we'll likely never have to smell Uranus' farts.

Now before you start judging Uranus for being stinky, remember that it's not the only planet that's dealing it out. According to NASA, "The surface of Venus is not where you'd like to be, with temperatures that can melt lead, an atmosphere so thick it would crush you, and clouds of sulfuric acid that smell like rotten eggs to top it off."

You apparently also don't want to get a whiff of Mars, either, according to Space.com, and after the Apollo lunar landing, the astronauts found some of the particles and dust from the moon in their gear and it all smelled like "wet ashes in a fireplace, or spent gunpowder from a just-fired shotgun." So the moon doesn't smell like toots, but it doesn't smell good either.

So if we ever end up having to all live on Mars or in space, remember to bring your essential oils. Because it's rancid up there.