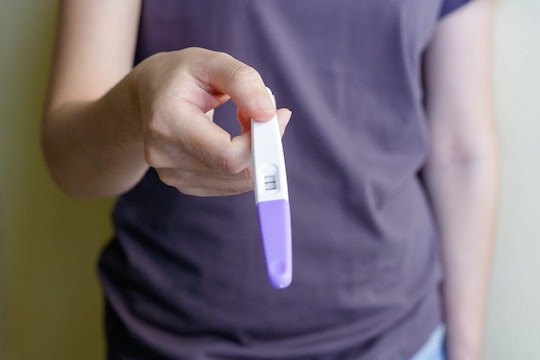 This Smartwatch May Actually Replace Pregnancy Tests. No, Seriously.

No matter what result you’re hoping for, few things can produce as much anxiety as taking a pregnancy test. And — probably because of all the tension of the moment — it might feel like there are a million ways to make a mistake. Feeling unsure about what time of day to test, at which point in your cycle to get an accurate reading, and even what container to use for the sample can all make you feel less than confident about the result. Well, all that could change soon: the tech-savvy women who suspect (or hope for) a pregnancy could have a viable alternative to the time-honored ritual of peeing on a stick. Earlier this week at a conference for educators and researchers in reproductive medicine, a team from Switzerland introduced a new smartwatch system to replace the traditional pregnancy test by alerting women when they conceive. And the science behind the device could mean that users would get an accurate answer without as much possibility of user error, according to The Telegraph.

The traditional, pee-on-a-stick pregnancy test can be tricky to get right. For starters, since the tests detect the pregnancy hormone HCG in a woman’s urine, testing before the hormone is present in high enough concentration can produce a false negative.

Research published in the journal Geburtshilfe und Frauenheilkunde earlier this year found that the instructions and type of pregnancy test can affect results, too; for example, it’s entirely possible to get a false response because of a contaminated collection container or diluted urine sample, according to that study. Finally, in rare cases, the tests themselves can be defective and give the test-taker an inaccurate reading.

But this new smartwatch system could sidestep those issues by tracking the subtle physiological changes that happen in early pregnancy, according to The Telegraph. According to that report, the Ava research team told participants at the American Society for Reproductive Medicine Annual Congress in October that their device collects tiny changes in skin temperature, breathing rate, pulse, and heart rate that occur after conception. The developers told The Telegraph that the smartwatch should detect pregnancy within a week of conception, the same as the advertised window of the most sensitive pregnancy tests on the market.

Senior researcher Mohaned Shilaih of University Hospital Zurich told The Telegraph that the team believed the device would do away with the “physiologically tedious” aspects of traditional testing.

Rather than waking up every morning and trying to pee on a stick to detect the rise in hCG you would simply have the bracelet worn both night and day.

The developers added that the new smartwatch would be an expansion of a wearable device currently on the market to help track fertility and conception timing: the Ava fertility-tracker. According to Ava Science, Inc. website, the smartwatch is currently priced at $249 and works with the Ava app for iOS and Android.

But while the technology may sound promising, the developers conceded that they would need to conduct more testing before offering the update to consumers. The current version of Ava was developed using data from more than 300 women over more than 1,000 menstrual cycles and 100 pregnancies, The Daily Mail reported. Shilaih said that the research team planned to expand that sample for better accuracy.

"The number of cycles are too low to be trustworthy for the larger population," he told that outlet. Shilaih added that by tracking data from more users, the team would be able to refine the algorithm that predicts fertility as well as the mechanism to detect pregnancy.

So worrying over whether you’ve gotten the directions on a pregnancy test just right may soon be a thing of the past. For good or bad, your watch could be able to tell you that you’re pregnant long before the average test — and long before you’ve even thought to ask.