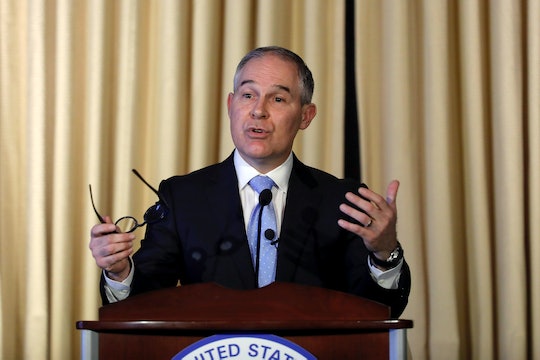 When President Donald Trump tapped former Oklahoma Attorney General Scott Pruitt, a well-known climate change skeptic, to head the Environmental Protection Agency, there was obviously some criticism of the decision. Pruitt took umbrage with the Obama administration's concerted efforts to put an end to climate change, joining with other Republican attorneys general to take legal action against President Obama 14 times throughout his tenure. Pruitt's history as a climate change skeptic made him an odd choice for the EPA, and concerned citizens won't be feeling much better now that Pruitt has said carbon dioxide isn't necessarily to blame for global warming.

During an interview with Squawk Box on CNBC Thursday, Pruitt said he does not believe that carbon dioxide is a primary contributor to climate change, despite the fact that the EPA's website directly contradicts his statement. (The website currently reads, "Carbon dioxide is the primary greenhouse gas that is contributing to recent climate change.")

According to CNBC, Pruitt contradicted the EPA's contention that carbon dioxide is a primary contributor to climate change:

I think that measuring with precision human activity on the climate is something very challenging to do and there's tremendous disagreement about the degree of impact, so no, I would not agree that it's a primary contributor to the global warming that we see. But we don't know that yet. ... We need to continue the debate and continue the review and the analysis.

This isn't the first time Pruitt has gone up against the scientific community or the EPA; In fact, he's made a career of flouting scientists and lawmakers who want things like clean air, water, and a better environment in general. A report by The Atlantic noted that, throughout the last 15 years, Pruitt has sued to prevent the EPA from:

Pruitt lost each and every one of these suits.

Scientists, lawmakers, and even the previous head of the EPA, Gina McCarthy, have condemned Pruitt's ill-informed statement that carbon dioxide isn't to blame for climate change. The Guardian reported that McCarthy, the EPA chief during the Obama administration, said:

The world of science is about empirical evidence, not beliefs. When it comes to climate change, the evidence is robust and overwhelmingly clear that the cost of inaction is unacceptably high. I cannot imagine what additional information the administrator might want from scientists for him to understand that.

One highly qualified scientist, Kevin Trenberth, senior scientist at the National Center for Atmospheric Research, questioned not only Pruitt's assertion but also his ability to lead the EPA:

Pruitt has demonstrated that he is unqualified to run the EPA or any agency. There is no doubt whatsoever that the planet is warming, and it is primarily due to increased carbon dioxide in the atmosphere from burning of fossil fuels.

Carbon dioxide is a greenhouse gas and we can demonstrate clearly that the observed warming of the planet would not have occurred without that change in atmospheric composition. These are scientific facts, not opinion, and it is incumbent on politicians to take account of the scientific evidence.

It is beyond concerning that Pruitt is willing to so flippantly disregard decades of scientific research to better fit his own agenda of climate skepticism. It sets a dangerous precedent for the man who is meant to be in charge of protecting the environment. A man who has worked closely with major fossil fuel companies to stymie environmental regulations throughout his career. A man with no specific scientific qualifications who nonetheless markets himself as an expert.

A man after President Trump's own heart, it seems.