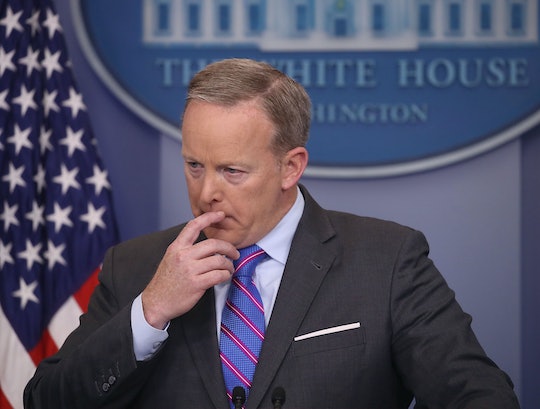 I can't imagine what it must be like to be White House press secretary under President Donald Trump. First of all, you would almost never be the first responder to the media; Trump's Twitter finger usually beats everyone to the punch. And of course, it's not like the White House has a healthy, happy relationship with the press corps these days. Obviously. Because White House Press Secretary Sean Spicer hid behind bushes to avoid press in the wake of Trump firing FBI Director James Comey on Tuesday. And it perfectly sums up the life of a Trump spokesman.

According to The Washington Post, Spicer was trying to enter his office on Tuesday night after the news hit about Comey's surprise dismissal. He was reportedly returning from an interview with Fox Business at the White House and would have been forced to make his way through a "swarm of reporters" to get back to his office. These reporters were trying to get answers about the president firing the FBI director in the midst of his investigation into possible Trump administration collusion with Russian hackers during the 2016 presidential campaign. Rather than responding to reporters, Spicer and his staff retreated into the dark and hid behind some tall hedges.

Perhaps Spicer thought he was done with pesky questions from the press regarding Comey's dismissal; after all, he had already shouted information from the door of his office at reporters standing nearby earlier that evening. He had reportedly attempted to email the information to the press but it wasn't transmitted quickly enough. So, three hours later, Spicer found himself trapped in the bushes. One of his assistants told the press that Spicer would answer questions as long as he wasn't being filmed. He allegedly called out:

Some social media users noted that Saturday Night Live will have a field day with this one. And to make matters even worse (or better, depending on your perspective) master Spicer impersonator Melissa McCarthy is hosting SNL this week. Praise be.

Spicer was in fine form with his responses as well, blaming Comey's dismissal on newly minted Deputy Attorney General Rod Rosenstein, who wrote a recommendation to Trump (along with Attorney General Jeff Sessions) that Comey be let go.

It was all him. That's correct — I mean, I can't, I guess I shouldn't say that, thank you for the help on that one. No one from the White House. That was a DOJ decision.

It's a shame he gave the interviews in the dark; I imagine some epic, trembling finger pointing was happening at the time.

The image of Spicer cloistered in the bushes, taking questions in the dark, had the internet dying. Because really?

For the rest of the week, The Hill reported that White House Deputy Press Secretary Sarah Huckabee Sanders will be filling in for Spicer at White House press briefings.

I'm guessing he got poison ivy while hiding in the bushes.

I'm also guessing this job was way more than he signed up for.