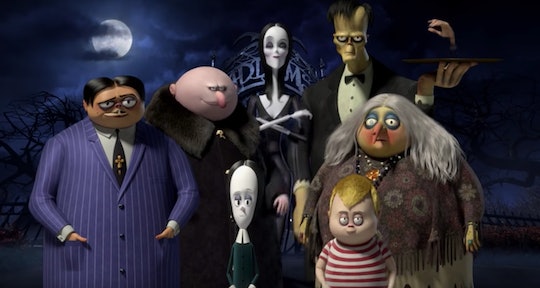 Need Other Plans On Halloween? You Can See 'The Addams Family' In Theaters For Just $5

Do you know what's really fun? Taking your kids trick-or-treating for Halloween on a night in perfect conditions. When there's just enough of a nip in the air to keep everyone from sweating. When your kids are well-rested and wearing costumes they love and also aren't itchy. Do you know what's not fun? Trick-or-treating in bad weather with cranky, tired kids who are sweating and somehow cold in their itchy costumes. Or in the rain or snow or cold. I'm here to tell you as a veteran parent that there might be another option: You can see The Addams Family in theaters on Halloween for just $5, so maybe if conditions aren't ideal you and your kids can just go for the treat instead of the trick.

The newest version of The Addams Family was recently released, this time as an animated feature starring the voices of actors Oscar Isaac and Charlize Theron as Gomez and Morticia Addams. This time around the entire family — including daughter Wednesday, son Pugsley, uncle Fester, et al — are run out of the "old country" and relocate to New Jersey of all places. Unfortunately, they don't exactly receive a warm welcome in the Garden State, especially when a local television personality (voiced by Alison Janney) wants them to leave lest they ruin her beautiful suburban neighborhood.

I know, I love it already too. It already sounds like one of those movies that both parents and kids will like and we all know that's the sweet spot.

Considering the fact that the Addams Family is sort of the First Family of Halloween, this could be a pretty solid alternative to trick-or-treating if your local forecast is looking grim for Thursday. Especially if you want to see the film at one of the nationwide Cinemark Theaters because they've decided to offer tickets to The Addams Family for just $5 for Halloween only, according to a press release announcing the deal.

There are also buy one get one free tickets available for Regal, Marcus, Harkins, Showcase Cinemas, Studio Movie Grill, B&B Theaters, and Classic Cinemas Theaters across the country, the press release noted.

So now I will ask you an important question: What sounds like more fun to you, dragging your child around in a wet costume and heavy coat through the rain or sitting in a warm, dry movie theater that conveniently also sells candy to reconnect with cousin It and the gang? Might I quickly remind you that tickets you can take a family of four to see the new movie for $20?

Of course, realistically speaking you could potentially see The Addams Family for $5 and also go trick-or-treating. It's not impossible, especially if you happen to be one of those incredibly organized parents or your kid has Friday off school or something.

But I say you should take advantage of an amazing deal at the movies, especially if it looks like stormy weather in your area for Halloween. Your kids might end up loving it even more than trick-or-treating. Or they might resent you for years to come. It's a coin toss.