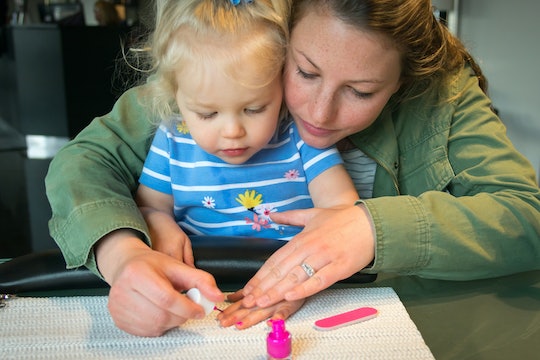 Self-Care Is A Joke If You're A Mom

I got to go to the grocery store last week ALL BY MYSELF. The moment my butt hit the driver’s seat, I felt like I was melting. My shoulders dropped. What I thought were permanent wrinkles disappeared. I could have floated to the store. Those 20 minutes were glorious. Not because I don’t love staying home with my toddler and 3-month-old, I made that choice and wouldn’t change it. But with everyone from Oprah to Kim Kardashian and Gywneth Paltrow harping on the importance of self-care for moms, it's hard not to think I'm doing something wrong. For moms, especially those with very young children, any time alone is about as real as the unicorns our little girls all want so badly. So for me, being solo in the self-check-out line is as close to “self-care” as I get.

Technically I’m still in my “fourth trimester” with my youngest. This basically means I physically expelled the baby but I’m still so exhausted, hormonal and bloated that I’m really still pregnant. How exactly am I supposed to "indulge" in self-care, like Kim Kardashian does? I am just trying to keep a 2-year-old and 2.5-month-old alive.

Taking care of new mothers is a hot topic. There seems to be general agreement that this country doesn’t take the postpartum period seriously enough and that new moms need to prioritize themselves more. Well, my husband has been out of town for a week. At this point I look and feel like a dumpster fire. But it’s fine. Hell, it’s normal. Just look at the new fun and not at all shocking report claiming moms work the equivalent of 2.5 full time jobs.

A generation or so ago, this would have been easier. Pretty much from the dawn of time until this century, families lived in multi-generational homes or in close community. Grandma could cook dinner or hold the baby while mom slept. Grandpa was always home during nap time. Now, moms are considered lucky if their family lives within driving distance. I remember being incredibly jealous of a friend whose mother stayed with her for a month after the birth of her daughter. She was able to pass the baby off to shower and even had a clean house. That goes a long way toward making a mom feel like a human.

Over the last nearly three years, I have seen two movies in theaters (Bad Moms and King Kong) with my best friend and have been on a real date with my husband four times (one wedding, an anniversary night out, one dinner and a concert).

Forget self-care in the infant stage. Either you are making bottles every two hours that you have to then clean, or you are topless and chained to the couch for 45 minutes every two hours. I chose to breastfeed, and for me pumping was a total waste of effort. That means I couldn’t be away from my daughter for more than 2-3 hours for over a year. And I’m a textbook alcohol lightweight, so no drinking for me. I managed to drink on five occasions (including one pump-and-dump out of desperation) before I got pregnant again. Woohoo. Baby number 2 is already going up to three hours without nursing at night. So at least I have hope.

I had my first child in the fall of 2015. Over the last nearly three years, I have seen two movies in theaters (Bad Moms and King Kong) with my best friend and have been on a real date with my husband four times (one wedding, an anniversary night out, one dinner and a concert). THAT’S IT FOLKS. Babysitters are expensive and honestly, the two hours we would get of fun would be negated by my leaving-my-kids-with-a-stranger stress and emotional breakdowns from my toddler.

Lifestyle guru and mom Amanda Chantal Bacon might want me to "thrive cosmically!", but I am being realistic about this. If I see another article or study about how important it is for moms to sleep, I’ll lose my mind. I know that I need to sleep but it’s just hard to make it happen. Infants wake up to eat. Toddlers have nightmares. Kids have a bizarre love of waking up before the sun. And frankly, after a day of diapers, nursing, crying, cartoons and playgrounds, it’s tough to unwind and fall asleep. I would love to just lay down and fall asleep (like my husband). But I’m waiting to hear my daughter cry that she sees shadows and am trying to remember what I need to get at the store.

Maybe nap time would be a good time for this mythical self-care. When babies finally nap for long stretches, you think you’re in heaven. Until you realize you have to be home by noon every single day and can’t leave your house for several hours. It’s a daily mini-jail sentence that you alter at your own risk.

The truth is that self-care isn’t just about alone time, it’s about unloading the mental and physical weight of being totally in charge of the lives of these tiny humans. Kudos to the mom who thrives on meditating for 10 minutes in the preschool pickup line or reads in the bathtub at midnight. But let’s be honest — self-care for moms is a total joke. Moms need help. Moms need time. But we’ll do it all anyways because we love our kids more than we love ourselves.

More Like This
When Does A Baby Recognize Their Father? A Pediatrician Explains
Paris Hilton Is Officially A First-Time Mom
Valentine’s Day Photoshoot Ideas For Your Little Cupid
Celebrate Your Baby’s 1st Valentine’s Day With These Instagram Captions
What Parents Are Talking About — Delivered Straight To Your Inbox