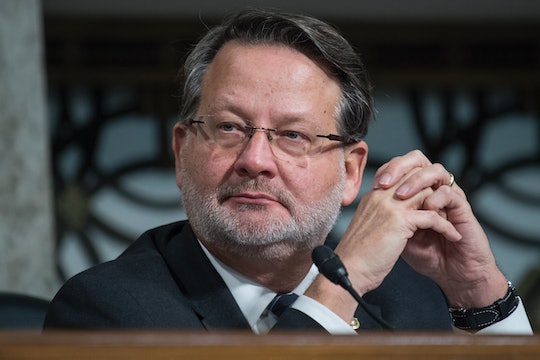 "It's Important For Folks To Understand": Senator Shares His Family's Abortion Story

In a recent interview with Elle magazine, Democratic Sen. Gary Peters shared his abortion story with the world. Why share such a personal story now, when his Senate seat is being challenged by anti-abortion Republican opponent, John James? When he leads James in the polls by the narrowest of margins just weeks before the election in November? Because, as he eloquently told the magazine, there is too much at stake when it comes to reproductive rights amid Judge Amy Coney Barrett's SCOTUS nomination.

"The new Supreme Court nominee could make a decision that will have major ramifications for reproductive health for women for decades to come," the Michigan senator told Elle. "This is a pivotal moment for reproductive freedom."

As Peters shared with the magazine, he and his wife Heidi, living in Detroit in the 1980s, were shocked when Heidi's water broke four months into her pregnancy. After seeing their doctor, the senator said that they were told to go home to wait for a miscarriage as the fetus was without amniotic fluid. "The mental anguish someone goes through is intense, trying to have a miscarriage for a child that was wanted," Peters recalled to Elle.

When the miscarriage didn't happen and Heidi's health deteriorated, the doctor wanted to abort the pregnancy but was unable to because of hospital policy, Peters told Elle. There was concern that she could become septic from a uterine infection, lose her uterus, and even possibly die, but that apparently did not sway the hospital board.

As Peters told Elle, "I still vividly remember he left a message on the answering machine saying, 'They refused to give me permission, not based on good medical practice, simply based on politics. I recommend you immediately find another physician who can do this procedure quickly.'"

The couple were able to get an emergency abortion at a different medical center where they happened to know the chief-of-staff, and Heidi told Elle in a statement that the entire experience was "traumatic" while her husband said it took an "incredible emotional toll" on the family. As Heidi noted, "If it weren’t for urgent and critical medical care, I could have lost my life."

Peters acknowledged on Twitter that his story is "gut-wrenching" and details the "complicated decisions" they had to face, but he shared it because it's a story that is "tragically shared by so many Americans" and because he believes it's "important for folks to understand families face these situations every day."

As Peters told Elle, he opened up about his family's experience as a reminder of important access to abortion care is to families all across the country. If President Donald Trump's Supreme Court nominee, conservative judge Amy Coney Barrett, is confirmed as the new justice, taking over Justice Ruth Bader Ginsburg's long-held seat, such access could be jeopardized.

In 2006, Coney Barrett signed her name to a newspaper ad that referred to the 1973 Roe v. Wade decision as "barbaric," as The Guardian reported. Additionally, according to The New York Times, anti-abortion activists have been championing Coney Barrett's SCOTUS nomination. What's more, during Tuesday's confirmation hearing, Barrett refused to answer questions about how she might rule on topics such as the Affordable Care Act and Roe v. Wade, as CNN reported. "I completely understand why you are asking the question, but again I can't pre-commit, or say yes, I'm going in with some agenda, because I'm not. I don't have any agenda," Barrett said.

In a Sept. 26 statement, Peters said he will "vote against confirming Judge Amy Coney Barrett to a lifetime appointment on our nation’s highest court." "From health care to women’s reproductive rights to whether workers have a level playing field against corporate special interests, there could not be more at stake," his statement read.

Whatever the future holds, Peters' abortion story, even 40 years later, highlights how imperative it is to protect laws and to keep fighting for legislation that protect reproductive freedoms.