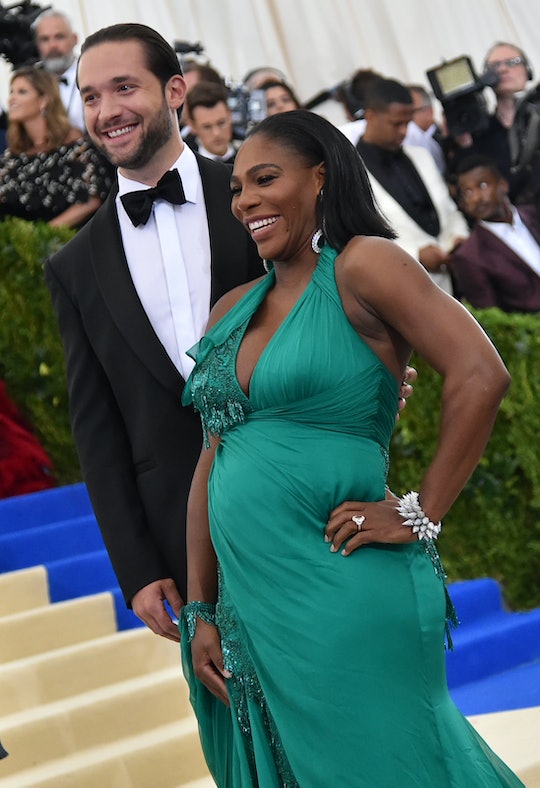 It seems like tennis queen Serena Williams loves surprises. I mean, actually giving fans a heads-up when she has big news for them to digest is clearly way too old-fashioned for this girl. Fair enough. Williams and Alexis Ohanian are reportedly married now, so take a moment to deal with that while I breathe into a paper bag.

Romper has reached out to Williams' rep and is awaiting a reply.

Williams and Reddit co-founder Ohanian began dating in 2015 after meeting in Rome and having their first date in Paris, because that's something that happens when you are Serena Williams, I guess. The two dated for over a year, but tried to keep their relationship as private as possible for as long as possible.

By December of 2016, Ohanian popped the big question at the same table in Rome where they met, because they are living in a perfect romantic comedy that hasn't even been made yet. Less than a month later, Williams found out she was pregnant. The two welcomed their first daughter, Alexis Olympia Ohanian Jr., on Sept. 1 of this year. And now, it seems they've hit their next milestone; according to E! News, the couple got married at Contemporary Arts Center in New Orleans on Thursday. I know; it's all very whirlwind and exciting. I'm exhausted, too.

Of course, this being the wedding of the one and only, winner of 23 Grand Slam titles, Serena Williams, the wedding was fit for a queen. Or a princess, actually; a star-studded guest list were welcomed to the Beauty and the Beast-themed ceremony, and were greeted by the classic song from the Disney movie, "Be Our Guest". Well-wishers were reportedly even asked to dress in costume for the event.

Considering the guest list included the bride's sister and fellow tennis star Venus Williams, Ciara, Kelly Rowland, Eva Longoria, Russell Williams, and even the other queen, Beyoncé, I'm really hoping fans get a glimpse of the ceremony quickly. You should know that, had I been invited, I would have dressed as Mrs. Potts.

Clearly, Williams has been having a blast enjoying her various wedding festivities. Just last weekend, she and a troupe of her best girls (including sister Venus, Ciara, and La La Anthony), reportedly enjoyed a bachelorette weekend at the Baccarat Hotel & Residences in New York City. There, the girls pampered themselves with five-star spa treatments, an exclusive brunch in Serena's private suite, and trapeze lessons. Oh, and of course a night out on the town with some late-night dancing and cocktails at the Magic Hour Rooftop Bar & Lounge and PHD Rooftop Lounge, according to E! News.

Once Williams and her best girls had recovered from their amazing bachelorette weekend, they were ready for a rehearsal dinner on Wednesday in New Orleans at Emeril Lagasse's Meril Restaurant. E! News reported that around 100 guests were in attendance for the rehearsal dinner, and they enjoyed fresh beignets from the world famous Cafe Du Monde for their dessert. Yes, to absolutely all of this.

As the big day arrived, fans were scrambling to get a look at Williams' wedding dress, which was reportedly designed by Galia Lahav. Unfortunately, the dress arrived in a giant bag and could not be seen. So I suppose fans will have to wait patiently for the Instagram pictures. Here's hoping little Alexis Olympia Ohanian was a teeny tiny flower girl. Because those pictures would be just about the best things in the world.

The fun is expected to continue for wedding guests, as a source told Entertainment Tonight that Williams and Ohanian have arranged a "full-blown brunch at the Ace Hotel with a DJ, games and recovery bar" for the day after the wedding.

If ever there was a wedding to crash, guys. This would have been the one.