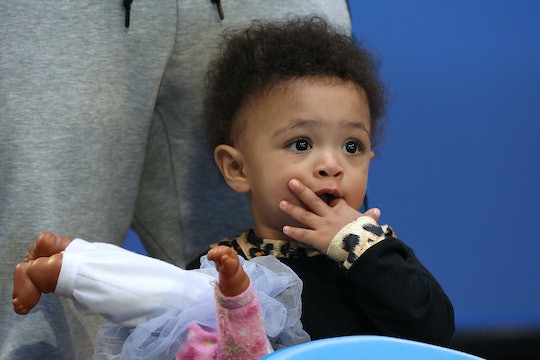 Serena Williams is a force to be reckoned with, this we know for sure. She has been the reigning queen of tennis for almost two decades and continues to stun the world with her talent, but her fans know her skills extend far past her chosen sport. She is a champion of women's rights, a philanthropist, and let's not forget a fashion designer. Never forget that. Being the daughter of such a force of nature might be difficult for some, but already her little girl is following in her mother's footsteps. Indeed, Williams' daughter walked the runway with her mom, which is a pretty impressive feather in her cap considering Alexis Olympia Ohanian Jr. is just 2 years old.

Williams and her husband, Reddit co-founder Alexis Ohanian Sr., welcomed daughter Olympia on Sept. 1, 2017. Since then, their little girl has not only become the star of her parents' social media feeds but her own as well. The ever-smiling little girl has her own Instagram page that boasts nearly 600,000 followers, where her parents share pictures of her playing with her toys and celebrating all of life's firsts. Her first smile, her first steps. And while this latest first wasn't shared on her Instagram feed, it's a pretty big deal that Olympia just enjoyed her first runway appearance at New York Fashion Week on Tuesday.

Olympia made a surprise appearance in her mother's arms on the runway for the tennis star's S by Serena collection, a fashion label Williams started in 2018 specifically for "strong, sexy, sophisticated women," as the website notes: "This is a celebration. This is for women who turn doubt into confidence and fear into courage."

As a lifelong feminist who works hard to empower women on and off the tennis court, the theme of Williams' fashion collection certainly comes as no surprise. Already it's getting a bit of a celebrity following, with Kim Kardashian West showing up for her friend's spring/summer catwalk event. Of course no one could really hold a candle to Olympia Ohanian, who shyly curled into her mother's arms while smiling sweetly at the cheering crowd.

Williams has made it clear in the past that she wants to set an example for her daughter, particularly when it comes to her passion and work ethic. In August, the proud mother shared a picture of Olympia in her arms, which was naturally adorable. But it was the caption of her post that really hit home. As Williams explained, "#ThisMama tries to spend as much time with @olympiaohanian as possible. She keeps me going especially during tournaments. Although the popcorn machine has her attention here, I know she's watching and learning to see how I persevere in challenging and rewarding moments. #ThisMama keeps going, how do you?"

It can be a challenge for any parent to incorporate their work life with their home life, and I think Williams' inclusion of Olympia on the runway is a great example of how to do it. The little girl might not remember her first time on the runway, but Williams is helping to set the stage little by little.

Teaching her daughter that ambition and drive can be a beautiful thing if you love what you do.