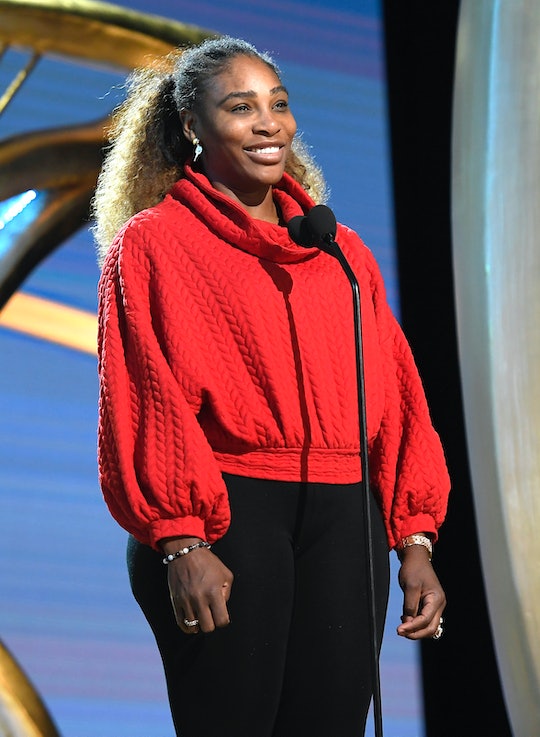 Last month, Serena Williams went on to win another title — in fashion instead of tennis — when she joined Poshmark's Board of Directors and even opened her own closet for sale on the platform. But now, Serena Williams and Poshmark are making your baby shopping dreams come true by releasing clothes belonging to Serena's adorable daughter for sale. That's right, your little fashionista can wear the same high end baby clothes as Alexis Olympia Ohanian Jr., and the best part is, sales benefit an important cause.

Poshmark announced in February that Williams would be joining the company's Board of Directors, as Ebony reported. In a press release announcing her appointment, Williams explained what drew her to the organization. “Poshmark is disrupting retail by making shopping and selling social again, and I love working with a company that gives anyone an opportunity to become an entrepreneur," she said.

As a part of her participation, Williams even made available some of her own clothes in the form of a "Posh Closet for Charity," which benefits a cause that she described as "very important to [her]:" the Yetunde Price Resource Center. Unsurprisingly, her items — which included a floral kimono worn to the 2017 French Open, dresses worn on the red carpet, and a custom-made Gucci jacket — flew off the shelf. But she isn't finished Marie Kondo-ing her closets for charity. This time, Williams and Poshmark are releasing a second drop in the closet exclusively devoted to clothing items worn by her daughter, Olympia.

Olympia's closet will be filled with fun items from brands like Burberry, Stella McCartney and Gucci, as well as an iconic Nike t-shirt of her mama. These and more will be available for purchase as of 12 p.m. EST on Thursday, March 7. Simply visit her closet at this link and you can buy the items there (but act fast, because they won't last long). These are some of the cuties that you can score:

Okay, but does this Serena white tee come in my size? Because I need it.

Little Olympia has been rocking stylish looks since day one. And now, your baby can be runway ready, too.

All of the proceeds generated by the closet will be donated to the Yetunde Price Resource Center. YPRC offers trauma-informed programs and works to ensure that victims of direct or indirect senseless violence have complete access to existing and new resources, and it is a cause that Williams has supported in earnest. The full proceeds of her own closet sale also went to the center.

Williams' warm feelings towards Poshmark were reciprocated in kind by the organization. In the same press release, Manish Chandra, founder & CEO of Poshmark, talked about how Williams was a perfect fit for the organization:

Poshmark was built by a community of strong, independent women just like Serena Williams. As both our company and community continue to grow, it’s important that we bring smart and diverse new voices to the table, and we couldn’t be more thrilled about what the future holds with Serena in our corner.

Joining the ranks of Poshmark wasn't the star's first foray into the field of fashion. In May of last year, Williams launched her own clothing line and announced the move on Twitter and Instagram, as Elle reported. In doing so, she also shared that fashion has long had a place in her heart:

They say life is about timing. I learned this lesson at age 18, when I chose to play a light tennis schedule because I wanted to go to fashion school. Some criticized my decision, but I knew I had two loves--tennis and fashion--and had to find a way to make them coexist. After 15 years of false starts, and people in fashion telling me "no," it only only drove me to work harder.

Fast forward to today and Williams is living her dreams. Between killing it on the tennis court, serving up stylish looks, and raising a beautiful baby with the love of her life, I'd say she's done pretty well for herself. And, judging by the pieces in Olympia's Posh Closet for Charity, an affinity for fashion runs in the family.

Editor’s Note: As of this article's publication date, everything in Serena's collection was already sold out.