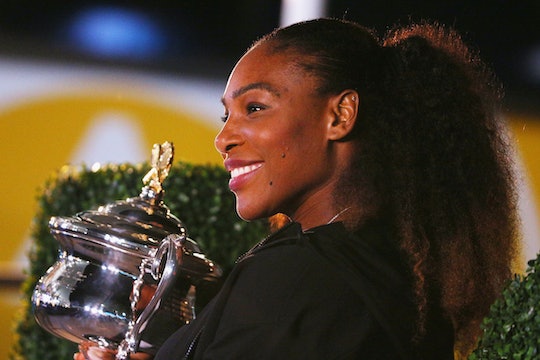 These Serena Williams' Quotes Are Powerful

Last week, sports legend Serena Williams announced that she is expecting her first child with fiancé Alexis Ohanian. Of course, everyone went wild over the news. After all, the world's most formidable tennis player will continue her legacy with the little one she's expecting in the fall. And there's no doubt that Williams will be an excellent and loving parent. Just read these five Serena Williams' quotes that show what kind of mom she'll be.

If it weren't for BuzzFeed's Jarett Wieselman, the world may have missed Williams' baby news. BuzzFeed's senior entertainment editor took a screenshot of Williams' announcement on Snapchat and shared the image to Twitter, according to Today. On Wednesday, Williams posted to Snapchat a photo of herself in a yellow one-piece bathing suit with the caption "20 weeks."

Of course, the news also had the internet putting its math skills to use. According to Boston.com, people have speculated that, if Williams is 20 weeks pregnant, she must have played the Australian Open in January while about 11 weeks pregnant. Her representatives haven't confirmed the theory.

Pregnant or no, the Australian Open was a record-setting tournament for Williams as she won her 23rd Grand Slam singles title. In other words: This girl is on fire.

On Monday, Williams posted a photo to Instagram with a beautiful message to her unborn child. In part, she wrote,

You gave me the strength I didn't know I had. You taught me the true meaning of serenity and peace. I can't wait to meet you. I can't wait for you to join the players box next year.

Williams' ode to her baby shows that she will shower them with so much love and care, and make sure that they come first, forever and always.

According to The National, after winning the 2012 U.S. Open women's final. Williams took a moment to reflect on her career. She said,

I really think a champion is defined not by their wins but by how they can recover when they fall.

Williams will no doubt teach her child that mistakes are just as important as victories because it's within those mistakes that you learn who you are and what you can achieve.

Williams has faced body-shamers ever since she won her first Grand Slam title at Wimbledon in 1999. According to espnW, Williams addressed the comments in a 2015 interview with Robin Roberts on Good Morning America, saying

It’s me, and I love me. I’ve learned to love me. I’ve been like this my whole life and I embrace me. I love how I look. I am a full woman and I’m strong, and I’m powerful, and I’m beautiful at the same time.

It's hard to hold your head up high when you face an unrelenting barrage of hatred and negativity about your body. But Williams refuses to let people who don't believe in her get in her way. I could only imagine that she will teach her child the importance of believing in yourself "when no one else does."

She'll Be A Warrior for Equality

There's no question about it: Williams will be one heck of a feminist mom. Her quotes on equal pay, body image, confidence, and supporting others show that she will fight hard for equality — a trait she'll pass down to her child. She won't shy away from hard truths and will slam down discrimination. Just take this quote from her 2016 Glamour interview with Melissa Harris Perry:

These sports have a lot of work to do. And I really hope that I can be helpful in that journey because I do believe that women deserve the same pay. We work just as hard as men do. I’ve been working, playing tennis, since I was three years old. And to be paid less just because of my sex — it doesn’t seem fair. Will I have to explain to my daughter that her brother is gonna make more money doing the exact same job because he’s a man? If they both played sports since they were three years old, they both worked just as hard, but because he’s a boy, they’re gonna give him more money? Like, how am I gonna explain that to her?

She'll Be The Epitome Of Grace

In addition to body-shamers, Williams has had to deal with decades of racist and sexist attacks. After Williams announced her pregnancy last week, Romanian tennis legend Ilie Nastase was quoted as allegedly saying, "Let's see what color it has. Chocolate with milk?" According to Sports Illustrated, Williams responded to Nastase's racist comments with a commanding grace and elegance befitting of a worldwide legend. She posted a statement to Instagram that read,

I have said it once and I'll say it again, this world has come so far but yet we have so much further to go. Yes, we have broken down so many barriers — however there are a plethora more to go. This or anything else will not stop me from pouring love, light, and positivity into everything that I do. I will continue to take a lead and stand up for what's right.

In so many way, Williams is — and continues to be — an inspiration for hundreds of millions of people around the world. Come the fall, she'll be an inspiration to one more.