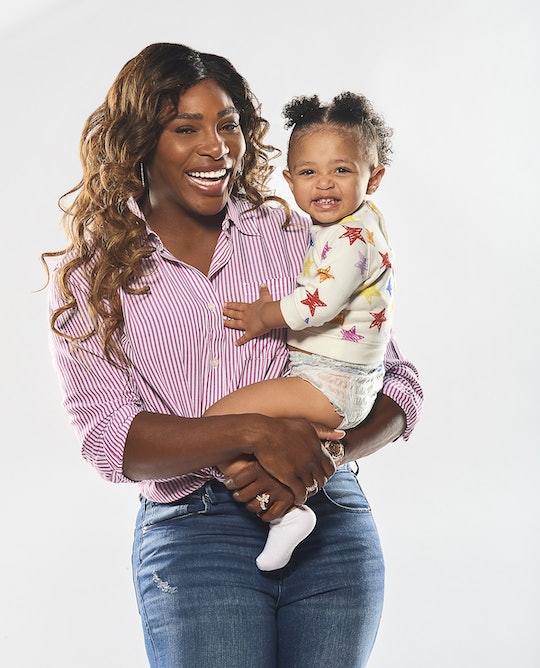 Serena Williams's Daughter Is A "Wild Child" & Face It, So Is Yours — INTERVIEW

Serena Williams is watching her daughter, Olympia, 1, sprint toward their couch. It's "dance night" and Williams knows Olympia is determined to make the most of it. But on her way to the couch, the toddler inadvertently hits her head on the chair. Williams' reaction to her daughter's mishap? Pride. Serena Williams is raising a wild child, after all, and has learned as a mom to embrace everything that "wildness" affords her daughter.

"I like to kind of embrace the word 'wild,' because it means [kids] are curious, they're active, and they're fun. And I want to normalize it," Williams tells Romper via phone. "I love that about [Olympia]." And because Williams is letting her daughter figure things out on her own, even if it means bumping her head on a chair from time to time, she's learning quickly, exploring her surroundings with a type of infectious and reckless abandon, and simply enjoying the spoils that come along with being a kid. You know, the things every child should be able to enjoy when they can.

"I absolutely love my wild child and I wouldn’t have her any other way," she says. "She’s learning things at a rapid rate because she’s so curious and because she wants to be in so many things."

Williams knows "wild child" can have a negative connotation, though, especially for little girls who still, in the year 2019, are expected to be seen and not heard. "With a boy it's, 'Oh, of course he’s supposed to be active!' but with a girl it’s, 'Oh, they’re just sweet.' But there should be no difference," she says.

According to a recent survey of 1,000 U.S. parents of children aged 6 to 24 months by Wakefield Research for Pampers, 75 percent of parents believe that society perceives a "wild child" as a bad thing, and 60 percent of parents have had to or felt like they've had to apologize for their children "being wild." Which is why Williams partnered with Pampers to help launch the new Cruisers 360 FIT diapers; diapers that are specifically designed to "keep up with every wild move a baby makes."

"Because [Olympia] is so active I really need something that's going to fit her so she doesn't have an accident," Williams says. "I've obviously tried other diapers and she's so active that they'll come off and she'll pee on my lap." The Pampers Cruisers 360 FIT diapers feature no-tapes and a comfortable all-around stretchy waistband specifically designed to adapt to moving babies, just like yoga pants, so now Williams worries less about accidents and more about keeping up with her 1-year-old (who skipped crawling and went straight to walking, by the way).

I think if we started at a young age teaching kids how to be themselves, they’ll obviously be more comfortable and have more confidence as they get older in who they are.

"You just got to be comfortable with letting them go and realizing that it’s OK, it's OK, they can do this, I'm going to let them do this, and letting them be themselves," she says. "Olympia does a lot of wild things, but it's a good thing because she's exploring things in nature, she runs outside, she experiences different things."

It's not always easy, of course, and Williams admits that at times it can be difficult to sit back and watch her daughter try to test the laws of gravity. But when a fellow parent and friend said that he wished he was more the way she is with her kid, instead of being overprotective with his first child, Williams was reminded that those moments of hesitation — of wanting to do everything for our children so we know they'll be 100 percent protected — are worth pushing past (when it's safe to do so, of course). "Obviously I protect her in such a great way, but at the same time I really let her kind of be herself."

I absolutely love my wild child and wouldn't have her any other way.

As the greatest tennis player of all time — who has often had to face gender discrimination head on and while standing in front of millions of people — Williams isn't here for any stereotypical ideas of how her daughter should explore her world. "The idea is girls are pretty and sweet and quiet and [covered in] pink," Williams says. "And I absolutely love all those things, pink is my favorite color, and I love all of those things on Olympia as well. But I also don't want to stop her from going on her little bike even though she can't ride it yet. She tries to get on it and push it and does those things and there's nothing wrong with that. I just want her to be herself."

So while people might raise an eyebrow at a child being "wild," Williams knows that when we hold space for kids to be themselves, unapologetically and without restraint, we're setting them up for a future of inspiring assertiveness and boundless curiosity. "I think if we started at a young age teaching kids how to be themselves, they’ll obviously be more comfortable and have more confidence as they get older in who they are," she says. And if the Williams family dance night is any indication, Olympia is going to be just as poised and determined as her mom.