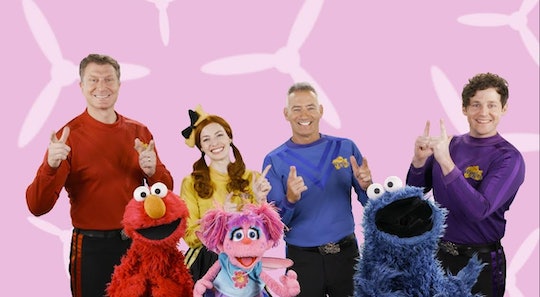 Sesame Street has been around for 50 years. Yep, five decades. Where children's programming is concerned, Sesame Street is basically the boss of everyone and has nothing to prove. But that doesn't mean the show is going to go stale. No way. In fact, the show's characters are happy to learn from some of the popular, newer kids on the block. And just recently, Sesame Street and the Wiggles teamed up to celebrate the show's 50th anniversary with a very cute and catchy bop.

As most parents know, the Wiggles are a hugely popular Australian group of children's performers. The group of four musicians — Anthony Field, Lachlan Gillespie, Simon Pryce, and Emma Watkins — originally formed in 1991, which means they've been around a pretty long time themselves. The Wiggles are all about getting kids up and moving around with their infectious songs and choreographed dance moves, and now some beloved Sesame Street characters are getting in on the action.

Cookie Monster, Elmo, and Abby Cadabby got together with the Wiggles to record the group's popular song "Do The Propeller" over the summer when the group was on their U.S. tour, and the video was finally released on Wednesday. If you thought Sesame Street and the Wiggles were charming on their own, be prepared for a super dose of charm when they perform together.

First of all, the Wiggles are wise enough to arrive with some "biscuits" for Cookie Monster, which is what they call cookies. (Does this mean he would be called "Biscuit Monster" in Australia? This blows my mind...) It makes sense that the Wiggles would know about Cookie Monster's particular obsession with baked goods as they grew up as fans of the show themselves.

This actually isn't the first time the Wiggles collaborated with Sesame Street. In September 2018, the two groups got together to release a YouTube playlist of their most popular songs for kids. This time around, however, they aren't just sharing each other's songs on a playlist. They are performing together, and already parents are sharing reports of their kids dancing up a storm to the collaboration. One mom shared on Twitter that her "kid danced so fast he was vibrating!"

"Do The Propeller" is available on both Sesame Street and the Wiggles' YouTube channels, as well as streaming services like Spotify and iTunes. Perhaps this new song will be so popular it will even give parents a break from "Baby Shark." You never know...