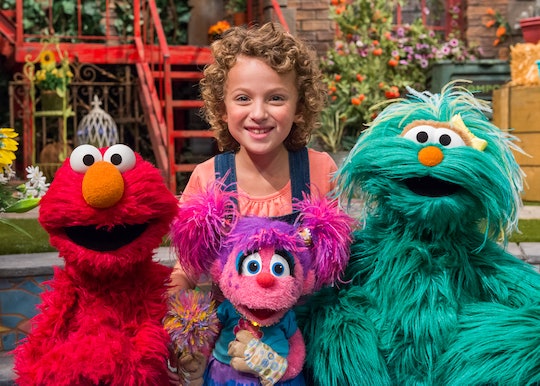 International moves, relocations, and goodbyes to grandparents, friends, teachers, and more are tough for kids, but Sesame Street has welcomed a new character named Charlie, who's helping highlight some of the opportunities and challenges military children face.

"Military kids often feel apart from their civilian companions because they don’t feel like their lifestyle and experiences are understood by other kids," Dr. Kelly Blasko, the Defense Health Agency's Program Lead for Military Kids Connect and Sesame Street for Military Families tells Romper. "Representation on a popular television show provides the opportunity to bridge that gap and show civilian children just how much like them military children are. And just how much they can learn from military kids."

Played by Violet Tinnirello, Charlotte, but her friends call her "Charlie," is the first child to join the Sesame Street cast in more than 20 years. Charlie's parents recently retired from the military and chose Sesame Street as their new home. Described by Sesame Workshop as "outgoing and eager to make new friends," 8-year-old Charlie jumps right into life in her new neighborhood.

During her debut episode — Episode 12 of Sesame Street's 50th season, "A New Neighbor on Sesame Street" — Elmo and Rosita serve as her welcome wagon, introducing her to Big Bird, Snuffy, and the rest of the gang.

As a military child, Sesame Street would likely not be Charlie's first move. In fact, many military families experience fairly frequent moves and Dr. Stephen Cozza, professor of psychiatry and associate director of the Child and Family Program at the Center for the Study of Traumatic Stress at the Uniformed Services University, tells Romper "this affords them opportunities to live in different neighborhoods, make more friends, and have interesting experiences abroad."

It's not always so easy, though. According to Cozza, it can also cause "disruptions to children’s lives."

"It can be a challenge making those transitions," Cozza says. "They're constantly making new friends, saying goodbye to old ones; there are curricula variations between states and jurisdictions. The same goes for extracurricular activities like sports that may not be available at their new location, so the effort they put in may not be recognized."

But the sort of representation that Charlie affords these children can help to ease the transition in a number of ways. Along with allowing military children to feel seen in media, Charlie's experience opens the door for important conversations with children about what life looks like for their peers who come from military families.

"Someone like Charlie may be able to help communities understand and facilitate military children," Cozza says, "framing both the needs and challenges that the child might have is the perfect opportunity to communicate those things to people who may not understand the realities military children face and how they can help."

For those looking for help starting conversations with their own children, Blasko suggests looking at the "Parents" section of the Defense Health Agency’s Military Kids Connect website, which she says "has some excellent resources that can help parents and children not from military families better understand the unique and challenging character of military life."

Charlie will appear on episodes all throughout the show's 50th season, providing families with ample opportunities to have these important talks and learn more about their peers with a military background. Catch the current season on HBO Max now, or PBS down the line.

Professor of Psychiatry at the Uniformed Services University; Associate Director of the Child and Family Program at the Center for the Study of Traumatic Stress.