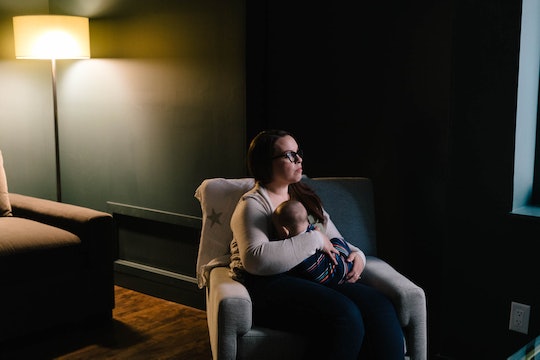 Painful sex after childbirth isn't something you should have to put up with. Luckily, most causes of dyspareunia — or uncomfortable intercourse — are treatable. By six weeks postpartum, a majority of women heal enough to have sex comfortably, but some deal with lingering pain for months, or even years, after that. But if sex still hurts six months postpartum, here are some reasons why and how a doctor can help you get things back on track.

As WebMD reported, an Australian study showed in 2015 that a quarter of women still experienced pain during sex 18 months after giving birth. Women who had C-sections or vacuum extractions were twice as likely to feel prolonged discomfort, but there are many potential reasons sex isn't as comfortable as it used to be. The thing to understand is that you're not alone, and you don't have to suffer in silence.

"I would encourage any woman who isn’t getting progressively better to contact [their doctor], and let them know that things aren’t going as you expected your recovery to go," says Dr. Kristin Lyerly, OB/GYN, of Park Nicollet Maple Grove Clinic & Specialty Center, in an interview with Romper. "It’s really hard to know what’s going on with your bottom, and in the postpartum period there are so many changes that are happening, whether it’s depression-related, or bleeding, or pain, or any number of things."

Doctors know sex is an important part of life, and they're there to help.