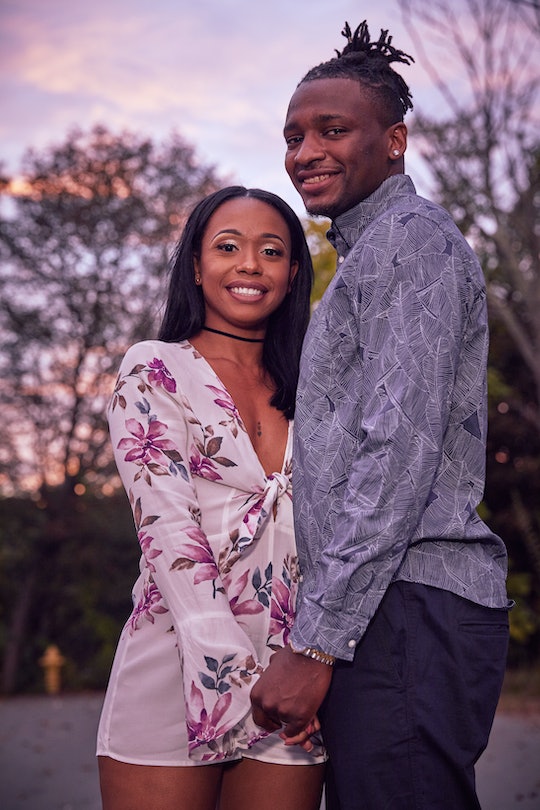 Over the past seven seasons of Lifetime's hit show Married at First Sight, in which a team of experts pair two strangers who agree to marry one another sight unseen, a few couples have actually stuck it out — like Shawniece and Jephte of Season 6, who are new parents to their daughter, Laura. In an interview with Romper, the couple teases drama on Married at First Sight: Happily Ever After? the spinoff show based on the original. This couple hasn't had a bump-free road, but they're both committed to their marriage and especially to their baby girl.

Unlike Bobby and Danielle, another couple on the spinoff who, somewhat improbably, maintain to this day that they've never had a fight, Shawniece and Jephte definitely looked like they struggled to connect at the beginning of their marriage. In the early stages they wondered if they were better as friends than a romantic couple. And while they clearly grew closer over the eight weeks of the show, and are now parents to an adorable daughter, their married life still hasn't been without its ups and downs — including a trial separation during which Jephte was seeing other women. But don't go writing these two off just yet. Like all marriages, they have their highs and lows and they promise you'll get to see it all. Jephte teases, "Viewers will also learn more about why I shut down early on in the marriage, and what we both did to cope and return to a much stronger, united force."

He also explains how he and Shawniece have learned to overcome the difficulties in their marriage and instead turn to one another for strength and support. He explains:

We’re learning to rely on each other a lot more. We’re no longer strangers and Happily Ever After brought us together a lot more. It’s nice to have access to the experts when we need them — they give us the tools we need to strengthen our marriage. The whole process is so accelerated that people forget we are continuously growing and learning about each other.

As for Shawniece, she would like to remind viewers that they are still working on building the foundation of a relationship — unlike couples who have been together for years before tying the knot. "It’s an accelerated process in every way but we are honestly taking our time with the relationship. We are building the foundation we need on both ends to sustain the relationship long term. We both believe we deserve that and our daughter deserves that."

To be completely honest with you all right now, this makes a ton of sense to me. Building a lasting relationship takes time and hard work — and fights happen (unless you're Bobby and Danielle, I guess). But I love that both Jephte and Shawniece are giving their marriage the time and care that it needs and building their relationship step by step both for their sakes and the sake of their daughter.

Nobody ever said marriage was easy — and skipping that whole dating thing can't make it any easier. So I'd like a big round of applause for Shawniece and Jephte doing the work.