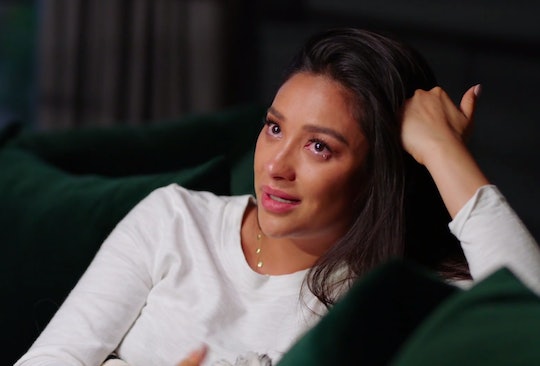 Pretty Little Liars alum Shay Mitchell might be basking in the glow of her recent pregnancy announcement, but it doesn't mean that she has forgotten her past. It has been less than two years since her miscarriage, so things are still very raw for the actress. And Shay Mitchell's video about suffering a miscarriage addresses the topic of loss with impressive honesty.

In June, Mitchell announced to fans that she's expecting her first child, joking on Instagram: "Does this mean I’m allowed to drive in the car pool lane at all times now?" And this announcement came when Mitchell was about six months pregnant, a decision she consciously made due to her past miscarriage, which occurred sometime in 2018. "I chose to hold on until I announced because of the first time," Mitchell explained in the first episode of her new YouTube series, Almost Ready. "It didn't go as I had hoped for, and it was extremely difficult."

In the heartfelt video, she explains that she and her boyfriend, Matte Babel, were "completely blindsided" by the miscarriage and had no idea how common miscarriages were. "The first time that I was pregnant last year, Matt and I hadn't been planning, it happened and we were really excited about it," she shared in the episode titled, "Keeping A Secret." "I was like 14 weeks, at that point, I had no idea the percentage of miscarriages. When it happened I was just, completely blindsided by it."

Mitchell also touched on the emotional pain of the loss, admitting that the miscarriage is still fresh in her mind. “I still have those photos on my phone and I still have all the doctor visits," she said through tears, according to People. "And it’s weird because I haven’t looked at them, obviously. But it’s not like I forgot about that happening.”

But this heartbreak hasn't stopped Mitchell from moving forward. She also gave fans a glimpse of her baby's future nursery, which was already in the works before her miscarriage. “We haven’t touched one thing in here because of the miscarriage,” Mitchell admitted. “I just want to wait it out. I want to get to as late as possible and then I’ll do this.”

The good news? Miscarriages are often a one-time occurrence and many people go on to have a healthy pregnancy following a loss, according to the Mayo Clinic.

For right now, it looks like Mitchell is just enjoying her life as a mama-to-be. Just take one look at her Instagram posts and you'll see everything from bump pics to indulgent food cravings. And like most celebrity moms, she's already being taunted by mommy-shamers.

Just a few weeks ago, for example, Mitchell was the focus of a ridiculous "prosciutto" debate. After the star posted a rather beautiful pic of an Italian-inspired lunch complete with cantaloupe and the cured meat, many called on her to change her diet for the sake of the baby. Queue eye roll. To Mitchell's credit, she handled it in stride and it hasn't stopped her from living her best pregnant life.

Cheers to Shay Mitchell for being extremely brave in sharing her feelings with fans. Miscarriage is something that happens to many people, and hopefully her honesty will help someone out there who is hurting too.