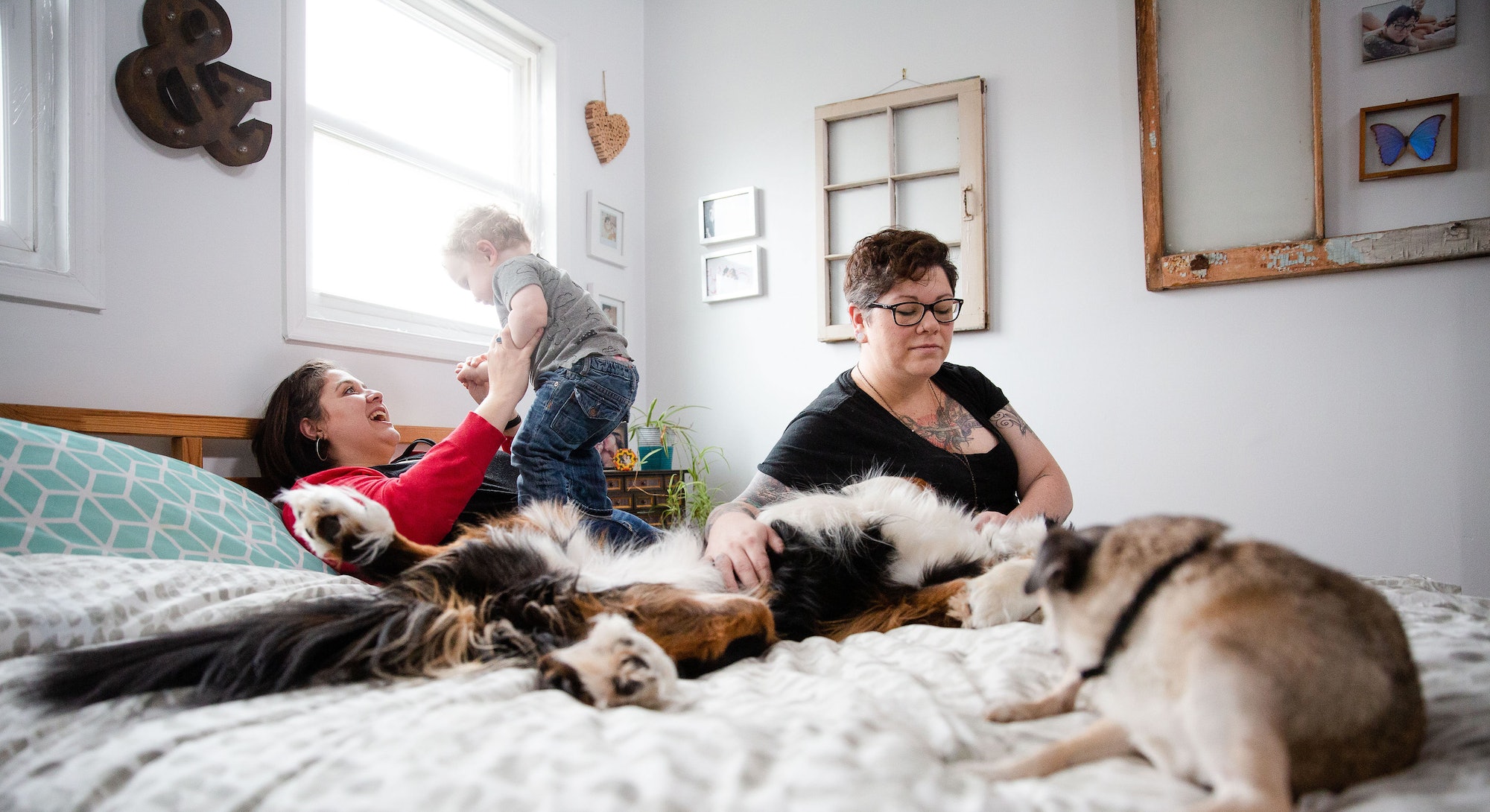 Infertility Is One Of The Hardest Things She's Ever Gone Through

There was only one baby at the photoshoot. As the other women sat waiting in a kitchen that overlooked a scrabble of Manhattan rooftops, Dese’Rae L. Stage tended periodically to her wife, Fel, and newborn, Gus. Everyone was there to be photographed for the start of Romper’s Trying project, a year-long series that kicked off in May 2018 and followed five women dealing with infertility, and you could have been forgiven for thinking the stakes were somehow lower for Dese’Rae — Des — with her brand new baby.

But that assumption would have missed a lot.

"The beginning was so hard and confusing in so many different ways, I'm not even sure if I processed the grief of the miscarriage yet," Stage tells me by phone 11 months later in a conversation looking back on the project.

For Stage, 2018 began with the news that her IVF cycle had been successful, and that she was pregnant. It was the kind of early knowledge that is unique to those tracking their HCG levels, looking for signs of implantation; others are, of course, often oblivious to the chemical fireworks taking place until they miss a period. Then, the week before her wife gave birth to their son Gus (also conceived through IVF), Stage realized she was miscarrying.

The beginning of her year documenting the experience of wanting to conceive thus began with the collision of two monumental events: the birth of her child, and the loss of the hope for another.

The birth of Gus, Stage's now-1-year-old, was traumatic for her wife, who spent days in the hospital being flooded with antibiotics after the incision from her emergency c-section became infected. In the aftermath, Stage wasn't sure she wanted to continue on her original path to also become pregnant. Did she really want to put herself through the risks of pregnancy and force herself into one of the many bad "fetal removal options," as she put it? After all, they already had a child now.

Then there was the matter of the fertility medication itself — the Tryers had first bonded over their mutual hate of Clomid, an oral estrogen regulator. "Clomid is the actual devil, and injectables are SUPER fun when you have a needle phobia. Watch out for the menopur: it burns," Stage wrote in an email chain with the other women at the beginning of the project. So the protocol proposed by her fertility doctor of Clomid and injectables didn't thrill her.

Stage did proceed with IVF and conceived from one viable embryo out of an original eight — lucky #2.

Subsequent efforts to kickstart her ovaries into releasing eggs for another round of IVF put her body through more turbulence, while the very idea of assisted reproduction stung. Stage understood prior to trying to conceive that as a same-sex couple she and Fel would not be able to procreate the same way as heterosexual couples. But she never imagined it might be very difficult to get pregnant even with assistance.

A few months into the Trying project, she was unsure whether she wanted to go through with the IVF. "I felt like I had really put my body and my mind through the wringer, and after having one baby, I was like, 'Maybe I don't need to do this. I don't know,'" she recalls. She and her wife Fel both originally hoped to be able to carry a child to term through IVF, but then there had been Fel's difficult birth, Stage's loss. There were still embryos she could use, but the situation was different.

Stage did proceed with IVF and conceived from one viable embryo out of an original eight — lucky #2. "And yeah, even after getting pregnant, I was super unsure and now, I'm unsure of what [being a mom of two is] gonna look like, you know?"

The pregnancy was detected and monitored by Stage from its earliest moments — she first did an at-home pregnancy test four days after the transfer. It came back negative. On day five, she got a faint positive. As she watched her HCG levels rise, she realized she was off to the races.

For many years now, Stage has worked in suicide prevention, and been forthcoming about her experiences with depression. But when a depression came on partway through her pregnancy during the fall, she didn't at first realize what was happening.

"A lot of the conversations that Fel and I had in the years leading up to trying to make babies were about my history with suicidality, what we would do if I got postpartum depression, how we would work in advance to make sure I had the support that I needed in the aftermath of giving birth. And not for a second did we think, 'Oh well, it's possible you could get depressed while you're pregnant.'"

As Stage explains, depression is something that is with her on and off through life, and often tends to come in June or July. "So maybe it was that, I didn't expect a nice little November depression," she says.

This episode struck on an emergent truth about perinatal depression: often what we term "postpartum depression" begins in pregnancy. The incidence of antenatal (while pregnant) depression (affecting 14-23 percent of women) and postpartum depression (affecting 5-25 percent of women) are virtually the same, per the American College of Obstetrics & Gynecology. And in that knowledge, experts say, is the opportunity for early identification and treatment of the condition.

"I remember people saying, 'It's just your hormones,' and it's like, OK, it's my hormones, but this is still very, very real," Stage says, "and it could be very, very dangerous if I weren't a person who was comfortable dealing with that part of my mind."

"I'm still kind of in shock about it because yeah, the statistics don't ... that's not what they say."

She had proactively arranged for her support people to be available if needed, but lives apart from family. Having grown up in Florida, she now lives in the Mid-Atlantic, a couple of states away from her parents and two younger brothers.

The Trying project gave participants four other people to go through the trials and tribulations of conception with, though they didn't all stay in touch. Seemingly everyone talked to Jessie, a woman from Seattle who is due to deliver her first child in the summer of 2019. As the end of the project loomed, news trickled out to the group that all five of them had conceived. This level of success bucks the statistical chances: 31 percent of women under 35 undergoing assisted reproductive technology will be successful in a year, according to 2015 CDC data; this figure drops to 24 percent for women 35-37.

When Stage heard all of the Tryers were also pregnant, she was surprised: "I'm still kind of in shock about it because yeah, the statistics don't ... that's not what they say."

The Tryers' columns have often resulted in notes from readers following along, grateful to see their experience represented. I asked Stage what she would tell families who are still trying.

"The obvious feeling is 'keep trying,' but not everybody can keep trying," says Stage, who estimates she and her wife put out about $30,000 to conceive two children, even with "great" insurance coverage.

Eight days before her scheduled c-section and 11 months on from that first photoshoot, I spoke to Stage by phone, who brought her typical humor and cheer, despite difficult circumstances (10 months of pregnancy, along with the rest of it). From watching Stage and the other Tryers work through each month's events — sometimes anticlimactic, sometimes seismic — it's clear that simply the intention to "try" for a baby creates a profound mental burden: a hyper-awareness of all the moving pieces, an acute knowledge of the waiting period, the need to emotionally project themselves forward to deal with potential outcomes.

Stage answered the call for Tryers all those months prior because she wants "people to feel like they're not alone"; to see miscarriage and infertility discussed openly.

A week after speaking with Stage, I open Instagram, and there she is: a brand-new little person, peering through a transparent sheet at her mother as a surgeon clutches the underside of her body. Stage is gazing up from where she lies on the operating table, her glasses on to get a clear look at her daughter, her fingers pinching her baby's tiny hand through the plastic. The surgeon's glasses are fogged up — wouldn't yours be? The picture is a perfect symbol: the spoils on the other side are beyond measure, but there's no easy road to get to there.

"To me," Stage says, "it feels like one of the most difficult things a person can go through."