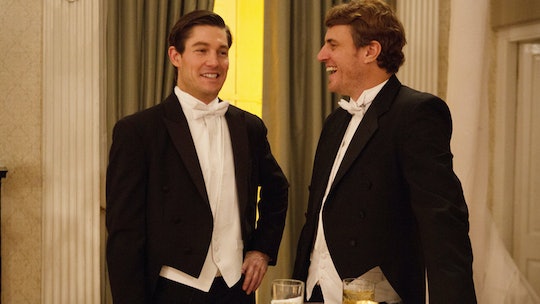 Is Bromance Dead? 'Southern Charm's Shep & Craig Get In Another Fight

The guys' trip on Southern Charm has proven to be far more dramatic than anyone could have anticipated. In the Jun. 19 episode of the Bravo reality series, Shep Rose and Whitney Sudler-Smith prepared the "roast of Craig Conover" while on a mini-vacation to help Austen Kroll get over a recent breakup. However, the feud isn't over just yet. While nobody does bromance quite like Shep and Craig on Southern Charm, the two reality stars will continue their fight in the upcoming Jun. 26 episode, and things are getting pretty dramatic.

In a preview teaser for the episode titled "Dick Moves and Dick Pics," it's pretty clear that Shep and Craig are fed up with each other. The clip opens with Craig and Austen stepping out from dinner with Whitney and Shep. And the two groups waste no time in taking shots at one another. Once separated, Austen and Craig express their frustration with Shep and his "smartest person in the room" mentality.

"He's mean," Craig says in the preview. "They put other people down to make themselves feel better and that's sad."

Meanwhile, Shep tells Whitney that Craig has "no class" and has "developed a sense of entitlement," despite not having "anything going on." Ouch.

Nevertheless, Whitney asks if Shep is mad at Craig. "No," Shep replies. "He's just hard to stay mad at."

Following the guys' trip on Southern Charm, Shep spoke with Decider about the events that happened in the episode. And while he and Craig are still friends, Shep stands his ground.

"Craig and Austen are a couple of ninnies. Come on. They are. They’re both sensitive people. I hate sensitive people, but I love them," Shep said. "I’m not out to hurt anybody, but if you’re really offended then you need to think about that again."

Shep also explained why the two Southern Charm reality stars have such a longstanding on-and-off-again bromance.

"A happy Craig is a good Craig. I like when Craig and I are getting along. The only time when we don’t is when he tries to be someone he’s not," Shep told the publication. "Maybe I’m a little too veracious with calling him out. Sometimes he can be angry and combative and I’m like, that’s not you, you’re a really sweet guy. But we all can be different and not the best versions of ourselves, that’s for sure."

When speaking with the Chicks in the Office podcast, Shep also admitted that the bickering doesn't end after the cameras stop rolling. While on a personal trip to the Bahamas together, Craig and Shep got in a fight.

The reality star then revealed what he said to his Southern Charm costar. And yes, it's pretty scathing.

"He tried to embarrass me and I was like, 'You cannot do that to me. Listen, there's a reason why I get twice as many requests to be places and get paid twice as much as you do. Just think about that for a second,'" he said. Yikes.

But as always, Craig and Shep's friendship prevailed. When the podcast asked how the two reality stars were able to reconcile after the fight, Shep replied, "That's called male friendships."