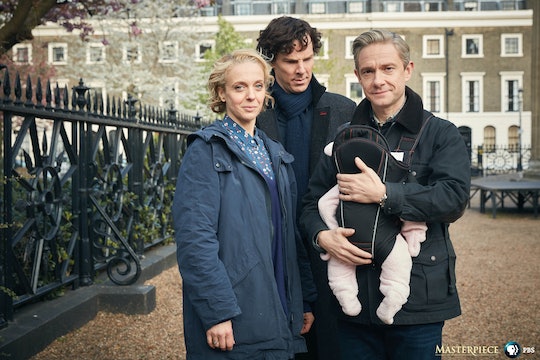 'Sherlock' Season 5 Theories To Give You Hope

Sherlock Season 4 ended with an impressive finale that closed on one very satisfying speech delivered by a deceased Mary Watson via posthumous DVD message. In it, she gently reminds Sherlock and Watson of their true calling, after four seasons of tumultuous best friendship. "When all else fails, there are two men sitting, arguing, in a scruffy flat," she says, "Like they've always been there, and they always will. The best and wisest men I have ever known, my Baker Street boys, Sherlock Holmes and Dr. Watson." This speech, though seemingly final, makes for some interesting Sherlock Season 5 theories, if you take into account showrunner Steven Moffat's viewpoint on the story.

We've always known that his take on the stories of Sir Arthur Conan Doyle was untraditional. Sherlock takes place in modern times, it's technologically savvy, and it assigns Holmes and Watson modern afflictions to explain their peculiar abilities: addiction, sociopathy, and PTSD. It's a smart and clever take on the story, but what if it was all a set up to lead us back to the original? Several key figures involved with the show have come forward to say the end of Season 4 would be a satisfying series finale. But Moffat argues that what we've seen thus far could easily serve as a prequel with more to come.

Said Moffat in an in interview with Entertainment Weekly:

I don’t know that we quite set out to do that story. But in the end it becomes Sherlock Begins, doesn’t it? He’s now where we’re most used to those characters being — Watson is the brave widower and Sherlock is the wise and humane version we’re most used to. They’ve grown up a bit and got older. If we ever make any more, it will be about two blokes in their mid-40s, which is the more traditional Sherlock Holmes. So yes, it’s sort of an extended origin story.

He bakes this idea into Mary's final speech on purpose. "Will you listen to me?" she asks. "Who you really are, it doesn't matter. It's all about the legend, the stories, the adventures."

Moffat goes on to explain:

As endings go, all it does is say, 'And they carried on solving crimes on Baker Street forever.' If we want to come back and solve more crimes we can do it, that’s no problem. We’re not allowed to end Sherlock Holmes. As Mary says, they’ll always be in that flat solving crimes, played by different actors. So the only ending you could ever have is, 'And the legend continues, forever and ever.'

It's a brilliant way of saying that even if this particular series ends, there will be no shortage of Sherlock Holmes stories to tell. But since we are talking about this particular series, it seems pretty clear that if it continues with a fifth season, Sherlock and Watson will finally shift into the more traditional interpretation of their characters: two detectives solving impossible cases as they arrive on their doorstep. Probably, Season 5 will take on a more episodic feel, if it continues, rather than weaving together such overarching, interconnected, emotional storylines. That way, we get the classic Holmes detective narrative, complete with the rich character backstories Seasons 1-4 gave us.

Moffat also admitted that he doesn't believe he has any loose ends left to tie up. So if he did kick off another season of the show, they really would be able to start fresh with a new case and a (finally) solid relationship between Sherlock and Dr. Watson. Mary would be proud.