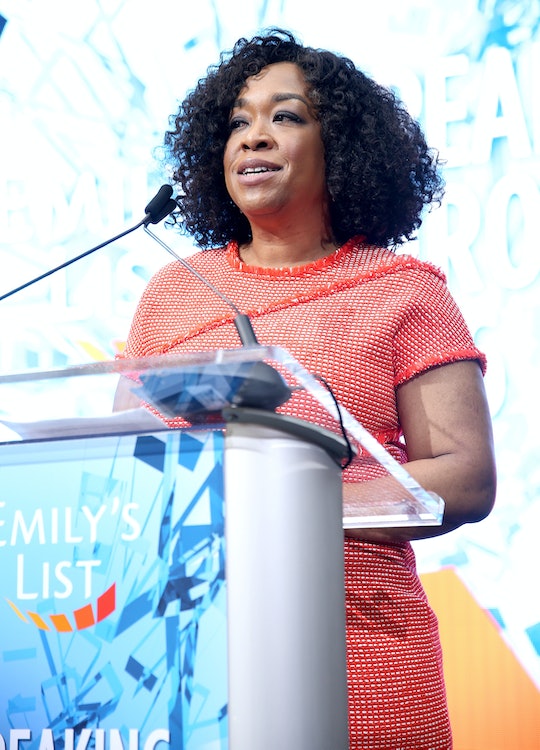 Shonda Rhimes is proving, once again, to be just about the most beautifully eloquent women in the world. The creator of Grey's Anatomy, Scandal, and the undervalued Grey's spinoff Private Practice (not in production any longer but watch older episodes and thank me later), was the guest editor for the September issue of Good Housekeeping magazine and for their "Awesome Woman Awards." Rhimes sat down for an interview with editor-in-chief Jane Francisco, and she had some words of wisdom about parenting to share. How is she raising her own three daughters? Well, Rhimes doesn't want them to be "nice" girls, apparently.

Rhimes has three girls, ranging in age from three to 14, and she told Good Housekeeping her daughters are all unique individuals:

They couldn't be more different from one another, but they're all stubborn — and I mean that in the best way. No one will ever take advantage of them. They will always go their own way because they have decided they're going to.

Which makes sense when you think of Rhimes' female leads on her shows (Olivia Pope from Scandal, anyone? Olivia Pope?). She writes female characters as strong, smart, unique individuals. Although, as she told Good Housekeeping, having strong female characters shouldn't really strike anyone as that unusual.

I keep getting asked how I write about such smart, strong women, and my response is, what's the alternative? Weak, stupid women? They're just normal people, not role models — if you're aspiring to be like any of them, something's a little bit wrong. You may want to dress like one or have her job, but do not aspire to be her!

The same holds true for Rhimes with her daughters. Rather than expecting her girls to be sweet, meek, and docile, she is encouraging them to go after what they want with gusto. And Rhimes knows from her experience as a kid who went after what she wanted.

That was definitely like me as a kid. It's so much better than having a nice, pliable child who can be easily manipulated. I don't want to have a nice girl. I'd rather have a stubborn girl.

She has at least one girl who is carving her own path:

While Rhimes is busy raising her daughters, dominating our television screens and promoting her new best seller, Year of Yes, she still took time out of her day to give everyone a fabulous little nugget of wisdom to carry in their pockets about what she wishes all women knew. She told Good Housekeeping:

I wish every awesome woman knew that the secret to life is that nobody knows anything. And nobody is better than you are. People deal with so much insecurity and spend so much time thinking, That person is better, so I couldn't possibly try this. Yes, you can! Everybody puts themselves in little pockets and holds themselves back, but there's no reason to. Make your own space.

And that quote is going up on my bedroom wall.

More Like This
10 Of The Raddest Movies From The '90s To Watch On Girls Night
Here's Why 'Mean Girls' Is A Fetch Movie Choice For Families With Teens
What Exactly Are Minions, Anyway ?
Barack & Michelle Obama Shared The Most Adorable Baby Photos Of Malia On Her Birthday