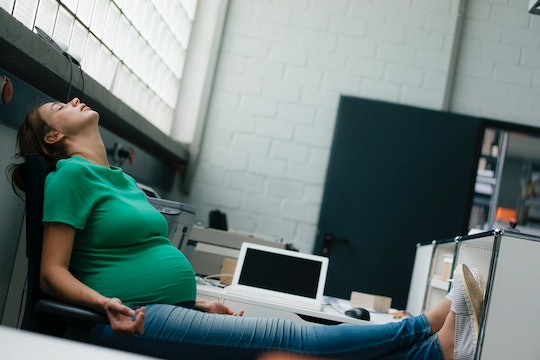 You know that shortness of breath feeling after running up a flight of stairs? This is how pregnancy feels for a lot of women — but often while they’re standing still or laying down. If you’re experiencing the joys of shortness of breath during pregnancy, you'll want to know why and if you should be concerned.

You're not literally running a marathon while you're sitting still, but when you're pregnant, your body's expending so much energy to grow your child that it might as well be. This frustrating feeling of breathlessness during pregnancy, though limiting, is mostly harmless and completely normal, says OB-GYN and author of Everything You Ever Wanted to Know About Pregnancy (But Were Too Afraid or Embarrassed to Ask Dr. Idries Abdur-Rahman. He tells Romper that shortness of breath occurs during pregnancy for a couple of reasons: One has to do with those pesky pregnancy hormones, and the other has to do with your organs and the growing human being in your body.

“First, the progesterone hormone, which surges during pregnancy, stimulates the part of your brain called the respiratory center, which in turn stimulates the feeling of breathlessness,” Abdur-Rahman explains. “Second, as the uterus grows, it presses on the diaphragm, the muscle between the abdominal cavity where the uterus lives and the thoracic cavity where the lungs live, reducing overall lung capacity.”

Another reason you could be feeling breathless has to do with the extra volume of fluid in your veins and arteries due to pregnancy, says Dr. Jamie Lipeles, OB-GYN and founder of Marina OB-GYN. Lipeles says this is called an “increase in intravascular volume.” He adds that women can also sometimes become breathless when they are pregnant because the body's muscles and bones are stressed to extreme levels. This makes it difficult for the body to expand properly and allow comfortable breathing.

So when does breathlessness during pregnancy warrant a call to your health care provider? Lipeles tells Romper, “The first and most dangerous cause of breathlessness in pregnancy is a pulmonary embolism, which is a blood clot to the lungs. The shortness of breath caused by a pulmonary embolism is generally sudden, onset, and severe.” It's way more intense than being out of breath. Lipeles says women should immediately go to the emergency room if they feel suddenly unable to catch their breath.

Other than the emergent reasons above, you should be just fine if you’re feeling the typical pregnancy-related shortness of breath — like you're working just a little bit harder to breathe in. Abdur-Rahman says that it won’t reduce oxygen levels to your baby. “The thought is actually that hormonal shortness of breath is the body’s way of increasing oxygen levels to the baby because it stimulates mothers-to-be to take deeper breaths.”

All in all, feeling breathless is just another one of those oh-so-fun pregnancy symptoms women get to enjoy. Special thanks to hormones and a tiny human growing inside you for this one. This too shall pass.