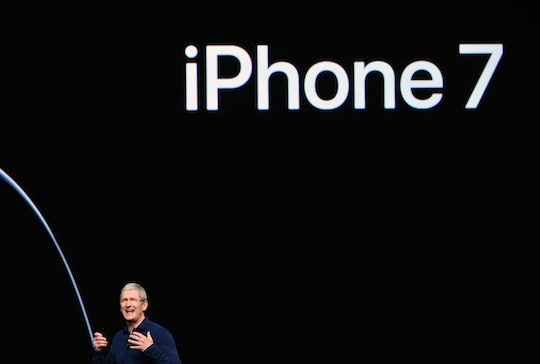 Should A Kid Have An iPhone 7? It Probably Depends On Them

Every kid wants a cell phone, I think; even those super evolved kids who seem like they don't care about anything as mundane as modern technology probably secretly want cell phones. Mobile devices are everywhere, and in many ways, they are everything. Whether we like it or not, this is the way we stay connected now. I was babysitting for a friend recently, and her four-year-old son was "play-texting" in the sand box and "scrolling" through imaginary pictures of Superman capes he wanted to buy. But does that mean a kid should have an iPhone 7, the latest and greatest to come out of the Church of Apple? It sort of depends on the kid.

The new iPhone 7 and 7 Plus promises to change our lives, just like all of the other iPhones, iPads, Apple watches, and so on have changed our lives. Apple advertising is sleek, and clever, and pervasive enough to pierce the subconscious of even the most discerning of consumers. So you can just imagine what it must be like for kids, who are notoriously swayed by even the most ubiquitous of ads (if you've ever sat through toy commercials with kids shouting, "I want that one!" "No wait! I want that one!" for every new ad, you know what I mean.)

According to a study done by MediaSmarts, kids are getting cell phones younger and younger all the time. As of 2015, approximately one quarter of kids in grade four had cell phones, and 85 percent of kids own cell phones by grade 11. If you are thinking of getting anyone under the age of 10 an iPhone 7, it might be a good idea to gauge their maturity level. Do they still break their toys? Do they lose their things? Do they choke on small objects (because the infamous new Airpods that come with the iPhone 7 and 7 Plus are just tiny, wireless ear buds that could create a potential choking hazard). If you think they are mature enough to use an iPhone 7, it's a good idea to implement some monitoring systems to make sure they are safe. You can install monitoring apps, read messages together, and limit the amount of time they are allowed access to their device.

For the 10-13 set, when kids sometimes get a little... shall we say, more independent, you might find that you have to set some pretty firm ground rules about their iPhone 7 if you choose to go that route. At that age, they might appreciate it a little more if you make them work for it, doing chores around the house and such. Once they have a precious, coveted iPhone 7, however, you may run into a few unforeseen issues.

Teachers clearly find cell phones disruptive in the classroom, and are always appreciative of parents who let their kid know, in no uncertain terms, they are not allowed to use their phone in class. Kids at this age sometimes struggle with boundaries and their peers; if they have an iPhone 7, it could make their friends jealous or cause an issue with stealing (it happens way more than you think at school).

Then there are the teenagers; let's face it, guys, they are just going to get them. And you will think you are monitoring them but they naturally know way more than you about technology so you will be out of luck. As a mom of teens I can tell you this; your best option is to just trust that you did all the ground work when they were younger and hope for the best.

And make them buy their own iPhone 7, or else they will break it or lose it.

Sorry not sorry, it's true.