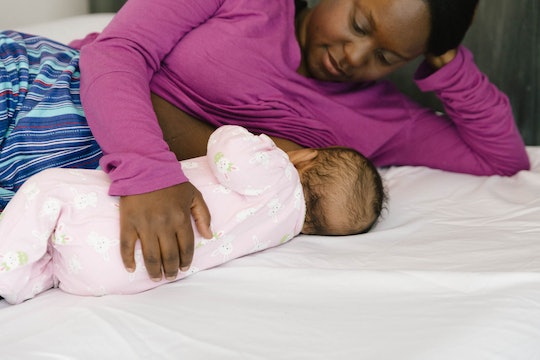 If Your Breasts Aren't Producing The Same Amount Of Milk, Here's What You Should Know

Alright, assuming it's probably gals-only reading this, I'll admit it: My boobs are crazy uneven when I'm breastfeeding. It's not as much a problem at first, but once I'm out of the fourth trimester, I am basically in need of a bra with two different cup sizes. Old lefty just can't keep up. But it's not just the size of my breasts that differ — it's the amount of milk they produce, too. On the rare occasion that I have to pump, I realize the discrepancy is about 2 whole ounces. Should both breasts produce the same amount of milk, or should I feel fine about shrugging it off? I reached out to a lactation consultant to educate me.

Kristin Gourley is an International Board Certified Lactation Consultant (IBCLC) at Lactation Link, a service that offers both in-person and online breastfeeding resources. In an interview with Romper, Gourley explains that, "Both breasts operate independently since they have differing amounts of breast tissue — none of us are perfectly symmetrical! It is normal to produce two different amounts of milk, and most people do."

Well, it looks like I'm not the only mama walking through the world a little lopsided.

Is there cause for concern? Or reason to put forth any effort to even things out? Only if it bothers you personally, says Gourley, as more than likely your baby is still getting plenty of your good, nutritious milk — and he doesn't care which side it comes from. "Making differing amounts is just fine," she says.

For moms who do want to even out the discrepancy, Gourley has some advice. "Try to feed your baby starting on the lower-producing side to even out supply on both sides," the IBCLC recommends. That encourages baby to get a great feeding out of the smaller side first before moving on to the higher-producing breast. According to Gourley, this sometimes results in evening out the volume in the breasts over time, but sometimes that simply won't happen until you wean.

The important thing to note, Gourley tells Romper, is that differing amounts of milk produced by the two breasts, "Generally doesn't cause any issue in reaching your breastfeeding goals, whatever they are." So whether you're hoping to have a breastfeeding relationship that lasts six months or 26 months, the odds are good that your body will be up to the challenge.

Have you ever wondered about the anatomy of your breasts? I know I'm guilty of taking them for granted without fully understanding how it all even works. According to the Sutter Health network in Northern California, "The breast is a gland consisting primarily of connective and fatty tissues that support and protect the milk producing areas of the breast. The milk is produced in small clusters of cells called alveoli. The milk travels down ducts to the nipples. The breasts will enlarge with pregnancy and breastfeeding. Breastfeeding is a supply and demand process. Therefore, the more you nurse, the more milk you produce!"

So what determines a woman's milk supply anyway? We know it's not the size of her breasts: Plenty of A cup women exclusively breastfeed their little ones and there are some larger-chested women who struggle to do so. The facts are, a woman's milk production is almost always determined by her unique baby's amount of sucking and how much milk is expressed based on the need of the individual baby's growth rate and metabolism.

The connection between our bodies and our babies is pretty fascinating, so hey, if it leaves me hanging a little lopsided, it's a small price to pay for the unbelievable miracle of keeping a human being alive with just my body alone. Sometimes all we need is a dose of perspective — and maybe a half padded bra.