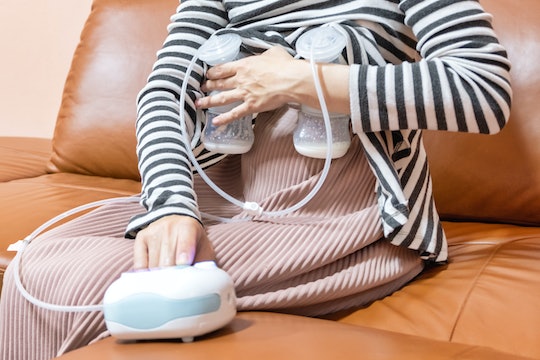 It might be 2019, but it turns out there are still a bunch of people who are uncomfortable with breastfeeding. Yes, seriously. Despite the fact that we live in an age of information and have access to more education than any other generation in history could have even dreamed possible, some people don't appear to be terribly interested in supporting breastfeeding mothers. In fact, according to a new study, about 1 out of every 4 people think breastfeeding or pumping in public is "inappropriate," so the next time you wonder if employers should provide lactation rooms for breastfeeding mothers, you can go ahead and keep that upsetting number in mind.

More Like This
Are You Breastfeeding & Also *Starving* At Night?
Um, "Rusty Pipe Syndrome" Is A Thing, & Every Breastfeeding Mom Should Know About It
Experts Offer Tips On How To Wean — Whenever You’re Ready
A Volleyball Coach Wasn’t Allowed To Bring Her Breastfeeding Baby Into A Tournament

Aeroflow Healthcare recently conducted a survey of America's perceptions about breastfeeding or pumping in public, and the results were somewhat grim. According to the findings, around 1 out of every 4 thought breastfeeding an actual hungry baby in public was inappropriate and the same went for pumping breast milk for that same hungry baby.

But here's where things get especially ironic: according to the study, 1 out of 3 people (31 percent) don't think employers should be expected to provide lactation rooms for breast pumping. More specifically, the research found that 41 percent of men and 23 percent of women do not believe employers should be required to provide a lactation room for breast pumping.

So let's break that down, shall we? First, there's still an alarming number of people don't want women to breastfeed or pump in public, but they also don't want them to have a room at work to do it in private. Then, let's add the fact that women are expected to go back to work not long after giving birth because the United States has no federal parental leave program and time women take off for maternity leave is often unpaid, according to The Cut.

"It’s discouraging that new moms still do not have the broad support from both men and women in this country to breastfeed in a public setting," Jennifer Jorden, Aeroflow Healthcare Director of Mom and Baby, said in a statement regarding the study's findings. "These attitudes make it challenging for women to confidently return to work, run errands or visit a restaurant without the fear or anxiety of being shamed."

She continued, "Considering the health benefits to both mom and baby, breastfeeding and pumping should be strongly encouraged and normalized in all settings."

The Break Time For Nursing Mothers Act requires employers to provide a space for working mothers to pump breast milk that is clean and private and not a washroom. According to the Office on Women's Health, this is a law that protects a woman's right to a lactation room in the workplace, but it unfortunately doesn't protect a woman from feeling ostracized or stigmatized for using said lactation room.

The U.S. Centers for Disease Control and Prevention (CDC) reported in 2018 that most mothers are interested in breastfeeding and do so initially. But, unfortunately, only about half of these mothers continue to breastfeed exclusively past the age of 3 months old, which led the CDC to believe new mothers weren't getting proper support to help them carry on.

"These rates suggest that mothers may not be getting the support they need from health care providers, family members, and employers to meet their breastfeeding goals," according to the CDC. "The early postpartum period is a critical time for establishing and supporting breastfeeding... Breastfeeding support from worksites is also critical as women return to work."

When you consider the massive health benefits breastfeeding provides for both mother and baby, perhaps it's time for people to get over their weird preconceptions, and get supportive.