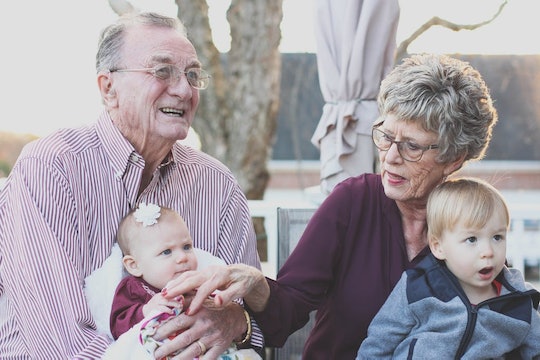 FYI, Grandparents Are One Of The Biggest Flu Risks For Babies

Newborns are among the most vulnerable populations, and along with pregnant women, they're more likely than the general public to experience an extremely bad outcome if the contract the flu. By now, moms- and dads-to-be understand the importance of vaccination themselves. It's totally safe, for pregnant women, too. If you have a baby on the way, you might be wondering if others in the family should get a shot, too. Should grandparents get flu shots? Don't let these key family members forget, with all the excitement of a new baby, to take precautions, too. After all, doesn't Grandma herself always say that an ounce of prevention is worth a pound of cure?

A startling 90 percent of deaths from the flu occur among the elderly, according to Healthline. While every adult should receive a flu shot, it's especially important for pregnant women, the elderly, and anyone interacting on a daily basis with a newborn baby. "It is important to remember that babies aren’t vaccinated themselves against flu until they reach 6 months of age," explains Amesh Adalja, MD, who studies pandemics and infectious diseases at the Johns Hopkins Center for Health Security. "Having those around the unvaccinated baby, including grandparents (who should be immunized in their own right), immunized against flu could create a protective cocoon around the baby," notes Adalja in an interview with Romper, explaining that a similar strategy is employed to stave off pertussis, or whooping cough.

When I had a newborn, a protective cocoon was everything I wanted from life. (Except maybe chocolate.) As it turns out, you can start spinning that cocoon while you're still pregnant — and not just by purchasing the perfect bassinet or nursing cover. According to Adalja, the only protection newborns have against the flu is gleaned from maternal antibodies and possibly breast milk, and you'll have more of those if you get a flu shot while you're expecting. Amazingly, an immunized mom-to-be can pass her resistance down to her infant — a phenomenon known as passive immunity. Getting vaccinated now can protect your baby from illness for her first few months of life, according to a review study published in Human Vaccines & Immunotherapeutics.

"We typically want to protect the young infants and children because they are among the most vulnerable to have a severe bad outcome from the flu, which can include death," pediatrician Dr. Jarrett Patton of Pennsylvania tells Romper. So, can you catch the flu from the vaccine? Absolutely not, and future grandparents shouldn't worry that they'll get sick before baby even arrives as a result. Here's Patton again:

"The flu vaccine is like many vaccines that are out there today. It is made from killed and broken up components of the flu virus. So these elements of the virus cannot cause an infection."

Patton goes on to explain that these inactive elements of the virus stimulate the immune system to provide protection, so that when grandma or grandpa are exposed to the real deal, their immune system is ready to attack the virus, which reduces the severity of the flu contracted, and may even "eliminate the disease entirely."

The flu is an extremely hazardous illness for newborns (and older folks, too). The good news is that the shot is safe, inexpensive, and easily accessible (just ask your local pharmacist). Better yet, by getting everyone in the family vaccinated, you're stringing together several strands of a protective cocoon that can help keep your newborn well. According to the Centers for Disease Control and Prevention (CDC), other measures you can take to thwart flu include covering your nose and mouth when you sneeze, washing hands often, and cleaning household surfaces thoroughly. My guess is that the soon-to-be grandparent in your life will happily help out with a few new baby chores, and get a flu shot, too.

More Like This
How Hot Is Too Hot For Babies? Experts Weigh In
There's A Good Reason Why Your Baby Is So In Love With CoComelon
Why Does My Baby Cough While Breastfeeding? Experts Explain
10 Ways Breastfeeding Is Good For Moms, Too