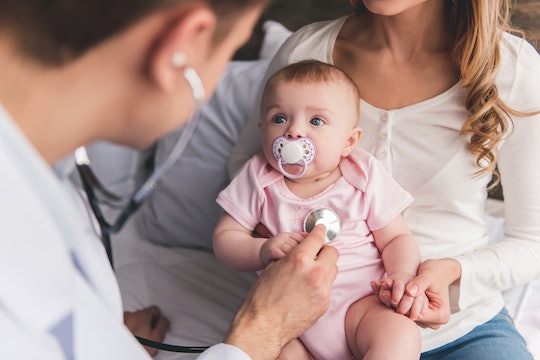 Here's How Worried You Should Be About The Measles Outbreak, According To Experts

If you have been anywhere near a television set, a radio, a computer, or a smart phone in the past week, you have likely already heard the news — As of April 26, 704 cases of measles have been reported in 22 states by the CDC. This is the highest number of cases recorded since 1994 of a disease that was reported to have been totally eradicated in 2000, according to the CDC. These stats are startling, to say the least. As a parent, I'm now wondering daily: should I be worried about the measles outbreak?

You're probably wondering the same thing. And who could really blame you? After all, every other news story brings with it another measles outbreak update.

According to World Health Organization's website, "Measles is one of the world’s most contagious diseases. It is spread by coughing and sneezing, close personal contact, or direct contact with infected nasal or throat secretions. The virus remains active and contagious in the air or on infected surfaces for up to two hours. It can be transmitted by an infected person from four days prior to the onset of the rash to four days after the rash erupts."

This means that those at risk for contracting the disease need to take adequate steps to protect themselves during the current outbreak, so it is important to understand your current risk level, which is ultimately based on your vaccine status.

According to the CDC, the MMR vaccine is licensed for administration to children aged 12 to 15 months for the first dose, with a second dose administered between ages 4 and 6. The CDC website says the following regarding the efficacy of the MMR vaccine, "Two doses of MMR vaccine are about 97% effective at preventing measles; one dose is about 93% effective."

This leaves young children (infants especially) at risk for exposure to measles. Dr. Natasha Burgert, a pediatrician practicing in Kansas City says, "It's not a secret that measles is one of the most contagious diseases on the planet. It's deadly and can have life-long consequences in survivors. Kids at highest risk are in harm's way due to the increasing number of cases throughout the country."

Another group of people who should be concerned about the measles outbreak are parents of children who are immunocompromised and adults who are themselves immunocompromised. Due to a weakened immune system, some children or adults may be unable to receive the MMR vaccine, leaving them susceptible to the measles disease. According to the CDC, a person should not receive an MMR vaccine who "has a known severe immunodeficiency (e.g., from hematologic and solid tumors, receipt of chemotherapy, congenital immunodeficiency, or long-term immunosuppressive therapy or patients with human immunodeficiency virus [HIV] infection who are severely immunocompromised)." The inability to receive a vaccine leaves this group susceptible to infection.

In addition to infants and the immunocompromised, there is new research that suggests adults born between 1957 to 1989 may not be protected from the measles virus. According to a report by the Detroit Free Press, the CDC requirements for the MMR vaccine changed in 1989 to require two doses for maximum efficacy. So, adults who were vaccinated before that year may have not received enough of the vaccine to be fully protected.

Adults born before 1957 are likely to have been exposed to the measles virus during childhood and therefore already have immunity, according to the CDC, but should get their immunity tested by a physician if they are unsure of their current immunity status.

If you are unsure of your vaccine or immunity status, your primary care doctor can check your immunity with a simple blood test. The University of Rochester Medical Center website explains that the test to check for measles antibodies is suggested for pregnant women, college students, healthcare workers, and anyone who might be at risk for exposure to the disease due to an uncertain vaccination status.

The bottom line — if you can get vaccinated, do it. If you can't, try to limit your exposure to potential measles carriers by wearing a mask, washing your hands, avoiding crowds, and encouraging those around you who can get vaccinated to do so.