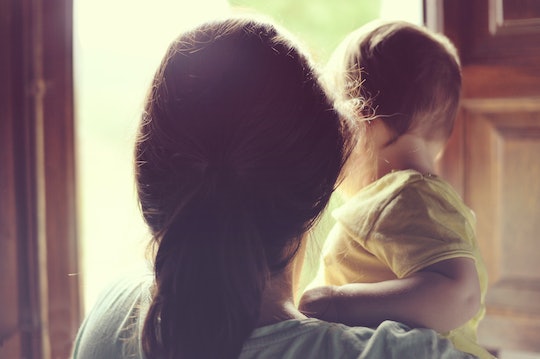 I Want Another Baby, But I'm So Tired. What Do I Do?

We had our baby late in life. Before pregnancy, when we spoke of trying, I was treated as if I was going to break and/or give birth to Dalmatian robot babies, but this baby was more than wanted. In fact, I felt as if she had been talking to me for most of my life, the way a small seed whispers to sleeping soil. Back when I was feeling ambivalent about having children, I had a vision that the inside of my body was drenched in candle-light, like an ancient cathedral — there was this beautiful amber glow and the sound of my daughter’s voice all around. She feels, and felt, inevitable.

I always only wanted one child. I don't have a good model of close sibling relationships, so having more than one child felt unnecessary, or felt like trouble. However, my baby was extremely gregarious and social from almost the beginning, smiling early and loving to interact with everyone. She basically makes me feel like I need to have another baby, a buddy, a kindred spirit. Someone to laugh with and tell stories to. My daughter would love a sibling. I just know it. But Jenny! I am exhausted. My baby is probably the easiest baby on the planet. She sleeps through the night, eats anything I give her, she’s perfect… and there are no words to describe the level of exhaustion. Perhaps it’s my age. Perhaps I’ve always been tired? Perhaps my job is taking its toll on me. And what about when we are old? I will be 70 when she is 30 years old.

Red pill: We don’t have another baby. We give our daughter everything. Attention, time, money, energy, love. My best friend is an only child and she is my role model, so I'm not too worried about my baby growing up spoiled or selfish or anything like that. Because one child is so much cheaper than two, we could use that money — the “second-baby money,” how wrong does that sound :( — to show her some of the world or pay for music lessons or something like that. I really don't know how we could afford to do those things for two children.

Blue pill: This baby came to me in a vision as well. He was inside a golden almond and his hands, his little baby hands, were in prayer where the seed of the almond tapered. He told me he was already inside, waiting. This was late last year and when I got my period (I had been convinced I was pregnant). Afterward, I cried for days and my husband was sad, too. I felt terrible for ever being logical or practical. I felt that I had betrayed him and that my body had betrayed me. But then time and reality and exhaustion set in again and the confusion returned.

What do we do? Love or more love (but less time, energy, money)?

Before my son was born, my husband and I took a walk in the woods. I was seven or eight months pregnant, so this involved a lot of peeing on the side of the path. We talked about our family plan, which so far had been limited to MEET-CUTE ON OKCUPID DISCUSS DESPERATION TO HAVE A CHILD F*CK GET PREGNANT. Now it was 13 or 14 months later. Also at age 40, I had waited so long to have my baby that I couldn't see beyond him. And my husband has a daughter, so really, we have two kids.

Still, I'd been thinking about whether to have a second child myself. The hard truth — at the time — was I didn't necessarily want another one, but I was terrified that the one still inside me would die. I saw scenarios all over the place: choking, drowning, bayonetting. One might say I had anxiety. I was afraid my son would live right up until my last egg had shriveled and died, and I would be left with nothing. More than that, my husband wouldn't be in the same boat. He would still have his daughter. I would hate life, and him.

As with your daughter, things have been pretty easy with my son. I managed to get pregnant right away, had a healthy pregnancy, and now have a healthy baby. He doesn't exactly sleep like a dream, but I have never been so in love.

But my newborn is gone, and my infant is fading into a toddler. Every new development delights me, yet I stare at my son, trying to remember every gurgle and gesture, trying to slow his growth with my eyes.

Now I'm in the same situation: Do I have another baby? What is this hole that opened up when my son was born, which at first he filled to capacity but which gets bigger with every second with him I lose? I don't want this to end so soon. My heart wants more.

But my husband and I are drowning in daycare payments. And we're tired. And we both work full-time jobs. And I have two part-time jobs.

Red pill or blue pill, this is what you're really asking: WHAT THE F*CK DO I DO WHEN I HAVE NO INFORMATION ABOUT HOW ANY OF THIS IS GOING TO TURN OUT F*CK F*CK F*CK ALSO I'M ON A TIME LIMIT.

The answer is that there's no answer. Or, more importantly, there's no wrong answer, which means there's no right one. What I'm trying to say is, you can't f*ck this one up. You can torture yourself. You can try to control the unknown by making a pro/con list, or a red pill/blue pill list, but the problem, especially for unknowns, is a pro/con list is fantasy. We have nothing but our instincts, and I don't know about you, but my instincts have been pretty f*cking wrong a lot of the time SURE THAT TABLESPOON OF COCAINE LOOKS GOOD NOW BUT FUTURE YOU RECOMMENDS PASSING ON THE URGE TO EXPERIENCE EVERY F*CKING THING FOR YOURSELF.

I can't tell you whether or not to have a second kid, but I can tell you this: Whichever decision you make, 100 percent of what happens next is out of your control. Reassuring, right?

I can't believe I almost didn't have my son. But I did, and I'm grateful. I'm also aware that if I hadn't, I never would have known what I was missing, which is a kind of grace. I would have found meaning in other ways, because that is what we do, no matter our circumstance: no kid, one kid, two kids, blue kid. Even dead kid, which is still my greatest fear. I can't tell you whether or not to have a second kid, but I can tell you this: Whichever decision you make, 100 percent of what happens next is out of your control. Reassuring, right?

Last week I had lunch with a friend. She has two kids, and they are the cutest motherf*ckers you will ever meet. She repeated what a few friends have told me: I love my kids BUT I didn't know how hard two would be. After we talked, I felt more settled in the idea that maybe I wouldn't have another one. Instead of pretending my kid is going to die, maybe — just maybe — I could pretend he's going to live. Maybe I could stop feeling distracted by what I might be missing out on in my hypothetical future and pour all my energy into being present, now, with my son.

Another friend, who has one child, confided that she's not sure she made the right decision by not having another — but she's sticking to it. She's an artist, and having one kid allows her to be a parent and do her art.

Later that week, I was watching Hidden Figures on HBO. The Taraji P. Henson character comes home late from work and has to get her three daughters back to bed. She gets them settled and then kiss, kiss, kiss. GASP. I turned to my husband.

"I WANT THREE KIDS," I said. "I WANT TO KISS A WHOLE BUNCH OF KIDS GOODNIGHT."

THIS IS ONE OF THE HARDEST DECISIONS YOU WILL MAKE IN YOUR LIFE. CLOSE YOUR EYES, SEARCH YOUR HEART, AND TAKE A LEAP OF FAITH. YOU GOT THIS.