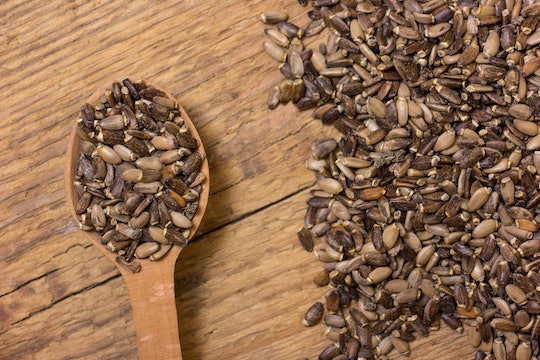 Should I Use Milk Thistle To Increase My Supply?

Moms who struggle maintaining their milk supply will often turn to galactagogues, which are foods, herbs, or drugs that are thought to promote or increase the flow of breast milk. A big problem, however, is that the proposed efficacy of these galactagogues is often more rooted in legend than in fact. Pick any online parenting board and you will easily find moms asking other moms which herbal supplements they should take while breastfeeding rather than turning to a healthcare professional for this advice. One question that is regularly asked is, "Should I take milk thistle to increase my supply?"

According to registered nurse Donna Murray of the health website Very Well, milk thistle, also known as Silybum marianum or St. Mary's thistle, is a tall, purple flowering plant with prickly spines originally found in the Mediterranean. Although milk thistle has a long history of use in medicine and healing, it has been mostly used to treat problems of the liver and gallbladder. Murray wrote that milk thistle has been utilized by breastfeeding mothers in India and Europe for generations, but noted that there is still no true scientific evidence supporting the claim that milk thistle actually increases the supply of human breast milk.

The Mayo Clinic agreed warning that there is a lack of sufficient evidence to support the safe use of milk thistle, therefore pregnant and nursing mothers should use it with caution, and only under the supervision of a doctor. People who have an allergy or sensitivity to daisies, artichokes, common thistle, and kiwi can be at risk for a severe adverse reaction to milk thistle, including anaphylactic shock and rash.

Because milk thistle has been traditionally used to detoxify the body and cleanse the liver, toxins are released into the bloodstream and can enter your breast milk. Murray warned that mothers who are or were smokers, heavy drinkers, or drug users can have a build up of toxins in their livers and should not use milk thistle while breastfeeding.

Although there are moms who swear by using milk thistle to promote milk production, until there is more scientific evidence, your safest bet is to try a different method to increase your milk supply.