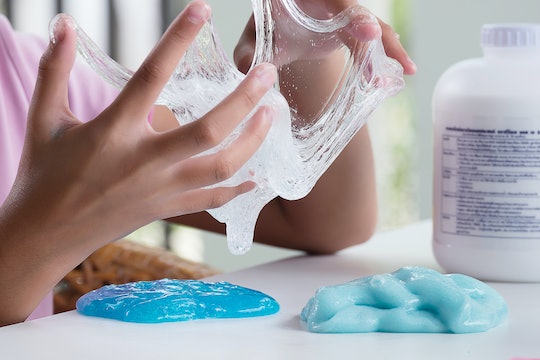 Read This Before Letting Your Kid Play With Homemade Slime

Pinterest craft projects are a favorite among parents, but even the homemade favorites, like slime, aren't always perfect. With a recent incident suggesting that homemade slime may not be safe, many parents are wondering, "Should kids play with homemade slime?"

Unfortunately, this one incident sounds pretty terrifying. CBS Philly reported that Kathleen Quinn, an 11-year-old girl, was busy creating some homemade slime when she felt terrible pain covering her hands. Siobhan Quinn, Kathleen's mother, told CBS Philly that her daughter's hands were covered in blisters and that Kathleen was crying in pain.

It turns out that the blisters on Kathleen's hands were from an extended exposure to Borax, one of the ingredients often found in homemade slime recipes.

A quick Google search for homemade slime will pull up over 12 million results, and many of the recipes call for Borax. But is Borax safe? Should your kids play with homemade slime or is this one DIY project that needs to stay in your Pinterest app?

Dr. Michael O'Reilly, pediatrician at Mayfair Pediatrics wrote for the Children's Hospital of Wisconsin blog that just because Borax is a natural chemical doesn't mean it's safe. Often used in household products like laundry detergent additives, cleaners, insect killers, herbicides, and some toothpaste, Borax is virtually everywhere in your home. It seems like an easy staple to use in a DIY project for your kids, but O'Reilly noted that it can be lethal if ingested, and for kids, that means less than 5 grams.

But in homemade slime, the Borax is diluted in water and mixed with other ingredients like glue, making the risk of over exposure symptoms like seizures, kidney failure, red and peeling skin, and skin, eye, or respiratory irritation not as likely. O'Reilly suggested in the article that the biggest risk is actually making the slime, where your child may be in direct contact with undiluted Borax, and not so much playing with the finished product.

With some safety precautions, homemade slime doesn't have to take a complete back seat to your other craft projects, though. You can let your kids wear gloves as they mix the concoction or try a homemade slime recipe that doesn't use Borax in the ingredients. (Especially if you know your kid has a penchant for putting things in their mouth.) Homemade slime itself isn't dangerous, as long as you're mindful of the ingredients and steer away from anything that could cause your child to have an allergic reaction. If you're unsure of your child's sensitivities, talk to their pediatrician before getting their hands too dirty in any craft project.