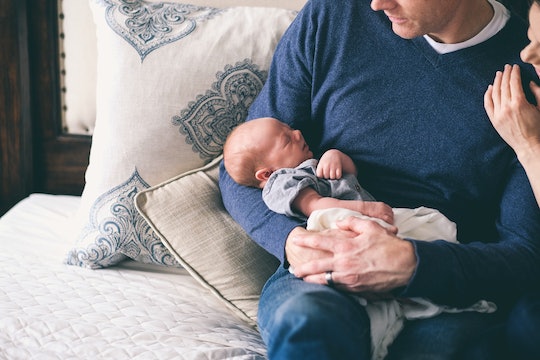 When you have a new baby, sleep suddenly becomes a bonafide hobby. Gone are the days when you took it for granted or passed up an opportunity for a power nap; counting sheep is now a luxury, no longer a game you play around with. Sleep is the hinge on which your precarious sanity swings, and you have zero time for anything that messes around with it... enter Daylight Saving Time. Much to the horror of parents everywhere, it's coming for us and quickly. How do you survive it? Should you adjust your baby's sleep schedule for the time change? One Certified Sleep Consultant gives Romper an emphatic yes.

Christine Stevens, founder of Sleep Solutions by Christine, says Daylight Saving Time will predictably disrupt your baby's current sleep schedule, and if you want to get it back on track sooner rather than later, you're going to have to intentionally make some adjustments. Falling back into a rhythm of healthy sleep patterns won't just happen, at least not for awhile. But there are ways parents can work to proactively move the process along, and save at least some (key word: some) degree of exhaustion for everyone in the week or two that follow.

So adjusting the schedule is important. But how exactly do you do it? Stevens' first piece of advice is to leave your clocks alone on Saturday night. Instead, she advises Romper in an exclusive interview, "Wake up on Sunday morning, then go around the house and change the clocks that didn't update automatically." Simply doing this little act will help remind your brain that your baby isn't conspiring against you. She's still just on the time she knows as normal.

"For babies (usually 6 months old and older) that have a pretty consistent schedule for bedtime and naps," Stevens recommends, "Move bedtime 15 minutes later each night until you reach the normal time again." For example, if 7 p.m. is her usual bedtime, put her to bed on Sunday at 6:15 p.m., Monday at 6:30 p.m., and so on until you're back to 7 p.m.

But what about naps, you ask? Stevens says the same rules apply. On Sunday, start nap times 45 minutes earlier than normal and move them 15 minutes later each day. So if your baby's morning nap is at 9 a.m. normally, start with 8:15 a.m. on Sunday, 8:30 a.m. on Monday, 8:45 a.m. on Tuesday and then finally 9 a.m. on Wednesday. Do the same for the afternoon nap.

Of course the younger the baby, the less predictable the sleep pattern, and for infants 6 months and younger who are still following an unstructured sleep schedule, Stevens' recommendation is different.

"If their bedtime and nap times are not predictable," she tells Romper, "Simply jump to the new time Sunday night as if you were traveling to a new time zone and use their awake time window (awake time between sleep periods) as your guide." Or, in other words, just roll with it.

"A great thing about this time change," Stevens points out, "Is that there are more hours of darkness, which helps make this transition a little easier. If your baby wakes up too early you can help his body understand it isn’t time to get up by keeping him in his crib in the dark room until normal wake time." Some parents might choose to stay in the dark room, perhaps in a rocking chair, while others may leave the room altogether if the baby isn't too distressed for long.

According to Stevens, it usually takes about a week for babies to completely adjust to the new time, but for some it can take twice as long. Be patient, and the whole thing will soon be behind you.