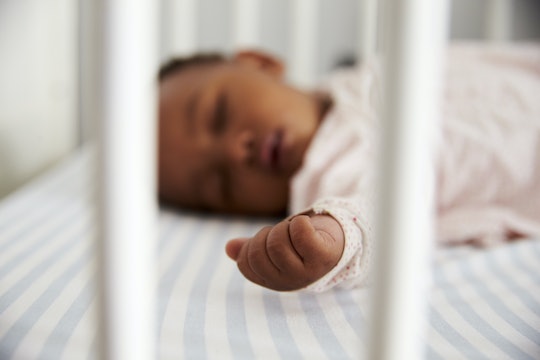 If You Want Your Baby To Sleep Well — & Safely — This Winter, Lay Off The Heat

Winter is coming. Eventually. The weather guy I watch promises it's not going to skip us this year, but as I stare at my weather app telling me it's 74 degrees, I'm dubious. When it comes, however, what precautions should you take if you have a new baby at home? For instance, is there a specific temperature that your house should be to keep baby safe and happy? You've probably heard fans are beneficial to sleeping babies. So should you have the heat on while your baby is sleeping, or should you have a cooler home at night for your little one?

According to the American Academy of Pediatrics (AAP), the ideal ambient temperature for the room in which your baby sleeps is between 65 and 70 degrees Fahrenheit. This temperature assures that your baby doesn't overheat and also doesn't require a great deal of bundling up to sleep comfortably. Depending on where you live, and what your home heating situation is like, this might mean turning on the heat in your home or it might not. The AAP stressed the dangers of requiring too many blankets or bundling, and the increased risk of sudden infant death syndrome (SIDS) associated with heavy blankets and bundling.

I remember when I was first thinking about having kids. You know that moment — the time when you start noticing every chubby cheek and frazzled mom on the streets, and suddenly, you think "I want that." I'm pretty sure it's irrational, but the phenomena exists. In my neighborhood, there is a very large Russian immigrant population, and I'd see a group of Russian moms all walking together, slowly, pushing gorgeous prams full of cherubic sleeping babies — in February. I asked a friend from the Ukraine who'd recently had a baby about why they did this. I mean, it's like 20 degrees outside, and they're going on a relaxing stroll with their babies. She told me, "It's the best thing for babies; they just sleep like the dead out in the cold."

It turns out, this is not just a Russian phenomenon — it's common all over northern Europe and Iceland. And there is some science behind sleeping and napping in the cold. According to researchers at Acta Pediatrica, babies who nap outside, bundled up, and under the very watchful gaze of their parents, sleep an average of 90 minutes longer than babies who nap indoors and they awake more alert. The cognitive behavioral therapists running the study noted that this does in fact translate to sleeping indoors. They hypothesize that cooler rooms with circulating air allow the baby to relax and sleep safely. Yes, a part of it is the bundling they do in the outdoors that restricts movement, but you can mimic that with a sleeping sack or a tightly swaddled newborn in a light fabric, like linen.

There is an increased risk of SIDS in warmer environments as well, according to the National Institutes of Health's Department of Early Learning. Because it's not safe to have your baby bundled when you're not actively monitoring them, it's best to keep the room as the institute suggested at about 65 degrees Fahrenheit, with just enough cover that their feet and hands are slightly cooler to the touch than their core.

My house at night is more meat locker than home. Even in the dead of winter, my husband and children are programmed to sleep in rooms that are about 64 degrees, and they still kick off all the blankets, even though they all sleep in their underpants. As for myself, I prefer slightly more warmth, but not much. And let me tell you, that temperature preference you're developing with your children as infants really sticks around, which is at least less expensive between November and April.

More Like This
These 4 Sleeping Positions Will Keep You Comfortable After A C-Section
Here's When Your Baby Might Start Sleeping Through The Night For Real
Should You Be Giving Your Toddler Melatonin To Help Them Sleep?
Abbot's Formula-Producing Plant Can Reopen In As Early As 2 Weeks — Now What?