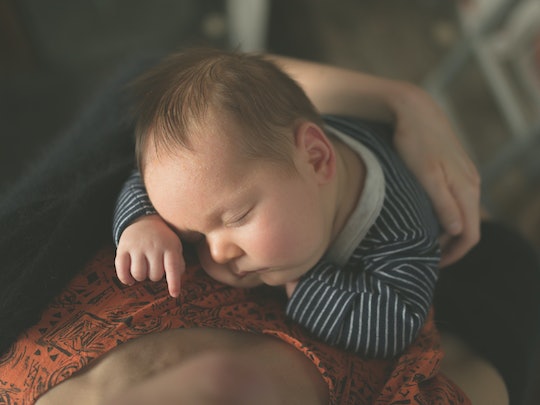 Actually, Here's When You *Shouldn't* Mess With Your Baby's Cradle Cap

While all three of my kids were different as babies (from appetites to sleeping habits), there's one thing they all had in common: cradle cap. No big surprise, considering the vast majority of infants develop cradle cap, and no big deal, either, considering it's relatively harmless. That doesn't mean I didn't obsess over it, of course, and by "obsess" I mean all I ever wanted to do was pick those sticky yellow scales off their little scalps. Know the feeling I'm talking about? Then you should also know there's a good reason to leave your baby's cradle cap alone.

Cradle cap typically shows up as crusty, scaling, flaky patches on your baby's scalp, according to The Mayo Clinic. There might be some redness to the underlying skin, and the patches might be dry and white or thick, oily, and yellow. The condition isn't painful or itchy (though it looks like it would be both), and it will most likely go away on its own eventually. Still, if your baby has a case of cradle cap, you'll probably find yourself tempted to pick every last one of those scales off yourself. This ape-like instinct is so strong I'm actually convinced it's some kind of primal grooming urge with pre-evolutionary roots. How well do I remember nursing my babies, staring down at their flaky little heads, trying desperately not to pick! (Usually, I caved.)

Why did I bother trying to stop myself from picking? Because everybody told me not to pick: Friends, relatives, strangers checking out my kid's scalp in line at the grocery store. "Don't pick that cradle cap or her hair won't grow," I would hear. "If you pick cradle cap, that just makes it spread." (Kind of like the "don't pull grey hairs or more will grow" myth.) "You shouldn't pick at cradle cap or it'll get infected." I didn't know if any of that was true, but I didn't want to risk it, either. (Again, I picked anyway.)

As it turns out, picking cradle cap doesn't make it spread. It doesn't cause hair loss, either, or at least not permanently: Any hair that comes away from your baby's scalp as a result of removing cradle cap scales "will grow back, and there will be no permanent hair loss as a result," trichologist Philip Kingsley explained on his website.

Still, one warning I got was valid: Picking cradle cap can lead to infection, according to Medical News Today.

As pediatric dermatologist Vikash Oza, MD, told The Bump, scratching or picking at the flaking skin can cause an irritation that opens the skin up to infection. That's not good, obviously. While most cradle cap can be handled at home, infected cradle cap will need to be evaluated and possibly treated by your pediatrician.

“Shampoo baby’s scalp every day and use a soft brush to try to remove scales and excess buildup,” Dr. Oza said.

“With cradle cap, you don’t want to let the scales accumulate, because the buildup can cause the condition to get worse.”

There are safe and effective ways of treating cradle cap that don't involve your fingernails, thankfully. The American Academy of Pediatrics simply recommends soft brushing and washing hair more frequently than usual with a mild shampoo (unless your doctor says to use a medicated variety).

If that doesn't work, the Mayo Clinic instructs parents to rub a few drops of petroleum jelly or a few drops of mineral oil onto your baby's scalp. Let it soak into the scales for as long as necessary (up to a few hours), then brush and shampoo as usual, making sure to wash all the oil out (leaving oil in the hair can make cradle cap worse).

Of course, there's also a range of popular alternative methods for healing cradle cap. As described on Mama Natural, these include substituting olive, almond, or coconut oil for the petroleum jelly or mineral oil, and using calendula, apple cider vinegar, and aloe as topical treatments.

It's always a good idea to run any ideas by your pediatrician before trying them out, but even if none of these measures end up being miracle cures, they're generally harmless (and they might distract you from your burning desire to pick the cradle cap away).