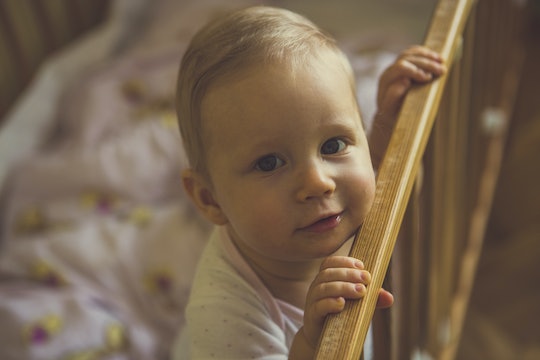 Why You Shouldn’t Let Your Baby Stay Up Late

Remember how awesome it was to "stay up late" when you were a kid? Yeah, well "staying up late" isn't so awesome when you become a parent. Even when you get your kid on a nice, early bedtime schedule, there are times when a special event or a sleep regression throws a wrench in your plan. Plus, letting your kids stay up can be a real treat. But should you let your baby stay up late? Don't let your childhood nostalgia fool you, because a set sleep schedule can make all the difference when it comes to your daily routine.

The American Sleep Association (ASA) encourages parents to put their babies down to sleep early, and follow consistent sleep routines with a regular bedtime. In fact, the ASA goes on to say that "following a consistent schedule will teach children they can sleep on their own," adding that consistency really is key.

The National Sleep Foundation has produced an easy-to-read table for parents to consult, highlighting just how much sleep babies need depending on their age. The foundation states that the recommended amount of sleep for a newborn is 14-17 hours and an older baby under 1 year of age should be getting 12-15 hours of sleep in a 24-hour period. The National Sleep Foundation also brings attention to the overall importance of sleep in children, saying, "Sleep is especially important for children as it directly impacts mental and physical development."

"These rhythms take time to develop, resulting in the irregular sleep schedules of newborns. The rhythms begin to develop at about six weeks, and by 3 to 6 months most infants have a regular sleep-wake cycle. By the age of 2, most children have spent more time asleep than awake and overall, a child will spend 40 percent of his or her childhood asleep.

Allowing your baby to stay up late, and avoiding a set sleep schedule, can disrupt that sleep-wake cycle. Still, it's pretty common for most parents to assume that if a baby stays up late one night, they'll sleep in the next morning and allow their probably sleep deprived parents to sleep in, too. This is rarely the case, though, and parents run the risk of facilitating potential sleep problems in the future if they don't adhere to a strict schedule. Babies that go to sleep late usually wake up at the same time, and even earlier, the next day. The Baby Sleep Site explains, saying, "Babies and toddlers who are overtired actually tend to wake early, so it may be that your late night causes an earlier-than-normal morning wake-up."

Another potential problem you might face if you allow your baby to stay up late is that you, as a parent, may not get enough free time to refresh and take care of your own needs. After looking after a baby all day, or working outside the home, parents are exhausted. An early bedtime for a child means a parent is allotted the chance to relax and enjoy whatever self-care activity they are able to set up for themselves.

Self-care is incredibly important for us all, so us parents deserve and need some time each day away from our babies. A late bedtime, while potentially setting up your baby with a disrupted sleep schedule, can also rob you of that undeniable right.

A set schedule isn't going to be followed 100 percent of the time, because life happens, but allowing your baby to stay up late shouldn't become a regular event. After all, it may cost you more than a sleepless night.