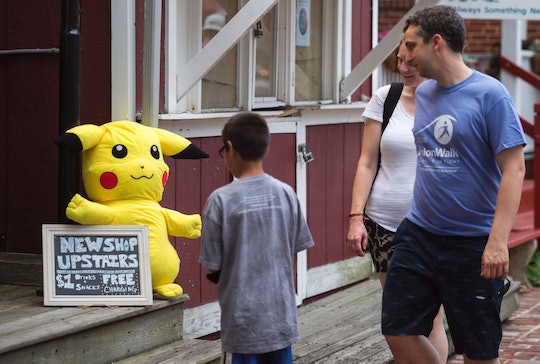 Should You Let Your Kids Use "Pokemon Go" On The Apple Watch? Parents, Weigh Your Options

"Pokemon Go" enthusiasts can soon peel their eyes from their augmented reality quests to "catch 'em all" and train them on their Apple Watches instead, as Apple recently announced that the wildly popular app will be available on another of its signature devices. This may not exactly cut down on screen time for young players, strictly speaking, but does still require Pokemon trainers to get out and move in order to be successful. While that's always great (#LetsMove), the inherent risks and potential dangers associated with kids' venturing out into the world remain. So, the decision of whether or not you should let your kids use "Pokemon Go" on the Apple Watch hinges on many of the same concerns associated with the phenomenon's debut.

In case you've been living inside a PokeBall for the past two months, "Pokemon Go" catapulted the classic early 2000s "pocket monsters" — which my fellow #millennials may remember collecting as actual, physical trading cards — into the age of iPhones and virtual GPS tracking. Players capture, grow, and battle their Zubats, Charzards, and Snorlaxes by trekking around to actual, real-life landmarks, where they're likely to meet other actual, real-life people and encounter dangers the game itself as well as distracted walking can present.

According to Forbes, "Pokemon Go" players will be able to use the Apple Watch to perform many of the key functions of the game, like tracking their walking distance integral to hatching Pokemon eggs, collect their bounty at local spots the game deems PokeStops, and even tracking down Pokemon they aim to add to their own caches. But they'll still have to use a smartphone to secure that Jigglypuff or Squirtle. Other than that, the rules of the game won't change much, if at all, when the Apple Watch rolls out with "Pokemon Go" later this year.

So, the first fact parents and guardians should consider when determining whether Pokemon Go is appropriate for those born since the turn of the century is that the app technically stipulates that they must be at least 13 years old to sign up, according to USA Today. It's possible (and easy) to circumvent this criteria, of course, and adults can also add children onto their own accounts in order to best supervise them. And the reasons that "Pokemon Go's" parent company, Niantic Labs, advocates for this are clear.

First, Pokemon Go integrates itself into reality, but it's obviously not part of our actual reality. Children who don't know better could end up pursuing Pokemon that are hiding in private property, or maybe even in the middle of a busy road. At a time when it's common to see grown adults tripping or even falling into fountains while texting or scrolling, it's easy to imagine children engrossed in a game forgetting the importance of also remaining 100 percent aware of their own surroundings.

The level of interaction with others that the game invites can also make adults wary of kids' involvement with it. "Pokemon Go" has been hailed as an unlikely tool for connecting players who wold normally play video games all alone by bringing them together at PokeStops, for example. Pokemon players also have the option to set up "lures," which attract Pokemon and, by extension, more players. Although this enhances the fun of the dynamic, interactive game in most cases, it can also be a problem for vulnerable players when some have nefarious intentions: A particularly disheartening development emerged when armed robbers in Missouri set a lure to commit armed robbery on the players who eventually showed up shortly after the game came out.

Writing for USA Today, Jinny Gudmundsen suggested that those charged with protecting the safety of the young and Pokemon-obsessed mitigate these dangers by chaperoning them, as well as encouraging a buddy system during which one kid plays and the other keeps a lookout on the outside world. Over at MarketWatch, Maria Lamagna reminded adults that "Pokemon Go" offers users the option to make in-app purchases — and that it it may be a smart idea to disable that capability when kids are at the helm.

As the country gets more and more intimately acquainted with "Pokemon Go," certainly more risks associated with it will be become apparent, as will useful hacks for making it safer for children. The good news for parents is that when the Apple Watch comes equipped with Pokemon Go, not much will have changed in the ways of function and how the game actually works, so it won't necessarily demand a reevaluation of merits and possible dangers. Perhaps the real question will be whether a pre-teen really needs to have both a smartphone and an Apple Watch.