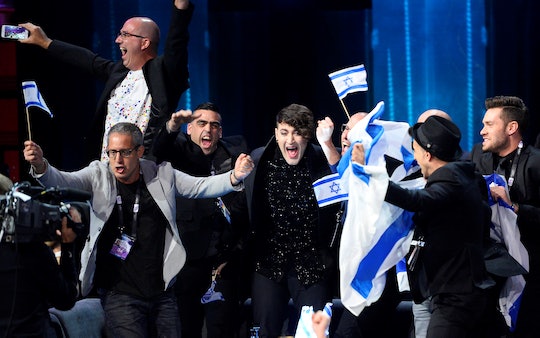 Should You Let Your Kids Watch Eurovision? Parents Should Decide For Themselves

While we all recover from the final season of American Idol and wonder where the time went — did it really run for 14 years? How is this possible? — it turns out there might be a new kid on the horizon. A flashy, over-the-top kind of kid who is sure to take the United States by storm. The massively popular show Eurovision will be made available as a live broadcast to around 50,000 American homes on Saturday through the Logo channel at three o'clock EST. But should you let your kids watch Eurovision? Word on the street is, the show can get a little racy.

According to the Eurovision website, the show has been running since 1956, making it one of the longest running shows in the world. The song contest boasts 180 million viewers, with as many as 43 European countries competing for top song in certain years. A little Swedish band called ABBA even won the contest in 1974, and they certainly seemed to do ok.

The singing contest is open to active members of the European Broadcasting Union (including the BBC in the UK), an alliance of public service broadcasters from Europe and neighboring countries. In 2015, Australia was included and allowed to submit a song, because they apparently love them some Eurovision.

So should you let your kids watch Eurovision? Well, there are certainly a few reasons why you might want to consider it (though for your own sanity, I would avoid watching it with toddlers, because they are basically terrible at sitting still).

Rather than individuals vying for a singing contract, on Eurovision, the singers are representing their whole country. So it is essentially the Olympics of song contests. Plus, the singers are sharing original material on live television, which is always amazing to watch. The "Big Five" countries who are always invited to participate include Spain, France, Italy, Germany, and the U.K. — because they provide the largest funding for the show which pretty much guarantees them a spot. Winners are decided by viewers and national juries before heading off to the semi-finals.

And if you've got young kids watching? Perhaps Eurovision can be used as a particularly flashy geography lesson.

Only the second non-contestant to perform at Eurovision, and Timberlake will be performing a new song. Don't you want to share that with your child?

As Simon Bennett, president of OGAE which is the world's biggest Eurovision fan club, told The Guardian,

For 60 years we have been enjoying this contest. It was an integral part of bringing west and east Europe together and I think it always will be that and it’s something that all us Europeans share. We are happy to share it with other countries, but perhaps not to broaden it too much or dilute its European content.

The show is full of over-the-top glitz and glamour, which might seem a bit too kitschy for some. The costumes, the commentary, and the performers can get a touch racy as well, with Australia's entrant Dami Im reportedly performing naked with wolves this year. But I think the positives outweigh the negatives. Watching Eurovision with your kids might offer them a little window to the world outside the United States, which is never really a bad thing.

So yeah... I'll be watching Eurovision with my kids if I can pin them down. Will you?