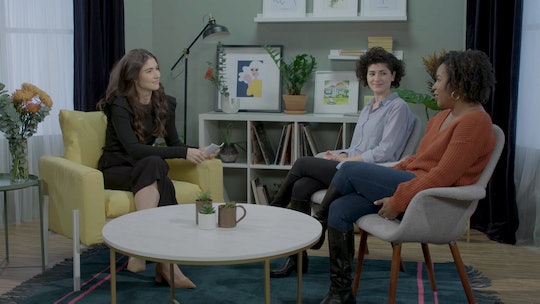 To Pierce Or Not To Pierce Your Baby’s Ears: Moms Debate On ‘Bearing The Motherload’

Becoming a mother means instantly sharing a connection with every woman who has made that same life choice. But since parenting isn't a "one size fits all" endeavor, becoming a mother also means being exposed to a wide variety of fellow parents making different decisions for their undeniably different families. In Romper's second episode of Bearing the Motherload (embedded below!), two mothers sit down to discuss a highly controversial parenting decision: piercing babies' ears. Does this specific parenting choice take away a child's right to bodily autonomy? Or it is a cultural practice worth preserving? Like most parenting decisions, there's no right or wrong answer.

Romper believes that there's no black-and-white parenting. There are so many gray areas when it comes to making a decision about your child, that it's impossible to always pinpoint what is right and what is wrong. When it comes to piercing your child's ears, audiences seem to be 50/50 on the subject, and it seems like something every mom has discussed with their friends at some point. Some parents choose to pierce their baby's ears for a variety of reasons, including but certainly not limited to: religious and cultural traditions; the belief that it's less painful at a young age; gender identification, and how easy the cleaning and after-care is. Another factor that comes into play is how short a baby's attention span is: if a child's ears is pierced at a very young age, some moms figure they probably won't remember the experience at all.

Vanessa, a stay-at-home mother of two, decided to pierce her daughter's ears. As she shares in this episode of Bearing the Motherload, "It's just something that I knew that I would do, because it's something that's done in my family." But it turns out, her choice to go to a mall to pierce her daughter's ears wasn't a great option and Vanessa ended up having to make a correction to her child's ears that most parents wouldn't even imagine doing, let alone actually attempt. But she says, "It's a moment that I will remember and cherish with my daughter, forever."

But with the current #MeToo and #TimesUp movements highlighting our culture's systemic sexual abuse problem, more and more parents are finding the concept of consent to be of vital importance. And, when it comes to altering a child's body without their explicit permission, consent is undeniably absent. Stop It Now!, a nonprofit aimed at preventing child sexual abuse, states: "Teens need information not only about child sexual abuse but also about the laws of consent in their state." And to understand the laws of consent, teens need to understand what consent is. Of course, that lesson can begin in childhood.

Appearing in the episode along with Vanessa is Dorina, a working mom with a 19-month-old daughter. She chose not to pierce her daughter's ears, because the lesson of consent was at the forefront of her mind. "It's her own decision to do that," Dorina says of her daughter. "I think, in the long run, it would give her the mentality that, 'OK, I decide what happens with my body.'"

In this episode of Bearing The Motherload, two experts tackle the issue that Vanessa and Dorina have such different opinions on. Dr. Farhat Khan, who served as director of the Chicago Public Schools’ Multicultural Resource Center, is an author, educator, and diversity expert, and uses her expertise and cultural knowledge to share why ear piercing isn't always a bad thing. On the flip side, Rosalind Wiseman, author of The New York Time’s best-seller Queenbees and Wannabees and founder of Cultures of Dignity, an organization devoted to the physical and emotional well being of young people, expresses why she thinks piercing a child's ears is a sign of a much bigger issue.

According to the American Academy Association, if the piercing is performed carefully and cared for constantly, there's little risk involved. Still, this is a personal parenting decision that needs to be made thoughtfully, regardless of what your inevitable decision ends up being. For Dorina, and many mothers, the low risk still doesn't negate the need to model consent at an early age. "Even now that she is 19 months old, she's still very young," Dorina says. "The whole point is to be well aware of what she's doing and what she is allowing to be done for her body."

Regardless of where you land on this issue, or what personal decision you make for your child, one thing is for certain: becoming a mother, and being constantly exposed to so many different people making different choices, is a privilege. It's incredible to be able to share even a small connection with a stranger. And, in the end, kindness, empathy, and the art of listening, will allow us to understand those we share this motherhood journey with. Watch Vanessa and Dorina below debate their choices to pierce or not pierce their child's ears.

More Like This
Paris Hilton Is Officially A First-Time Mom
When Does A Baby Recognize Their Father? A Pediatrician Explains
Valentine’s Day Photoshoot Ideas For Your Little Cupid
Celebrate Your Baby’s 1st Valentine’s Day With These Instagram Captions
What Parents Are Talking About — Delivered Straight To Your Inbox