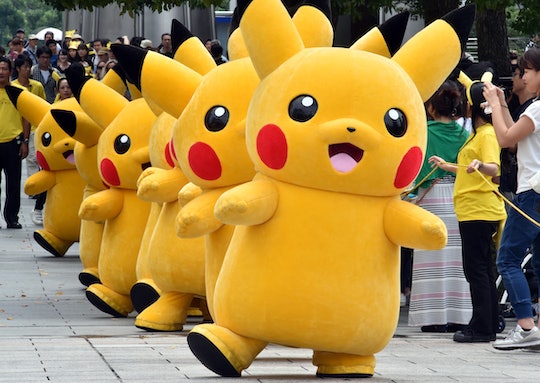 Should Your Kid Play Pokémon Go? It's A Good Question For Parents To Consider

It's been a nostalgic week for fans of the '90s game, Pokémon. The Pokémon craze has found its way back into the widespread and international spotlight, but this time in an augmented reality video game, Pokémon Go. The new video game, available for free download on iOS and Android devices, takes players outside in the real world, in search for Pokémon in the game. So, should your kids play Pokémon Go? Well, it certainly has its pros and cons.

Screen time has been a major topic of conversation for parents concerned about their kids' attachment to smartphones, computers, and other technology. Mostly because it often times can take away from time outside, and other outdoor adventures (as millennial myself, I can say the smartphone-less days of playing in the grass seems like centuries ago). But interestingly, Pokémon Go does force players to go outside, in search of Pokéstops (various locations), and all sorts of throwback Pokémon characters like, Pikachu, Charmander, and Jigglypuff. So, the outdoor exercise may be a pro for some parents who might enjoy moving around with their little ones, and training Pokémon – though technically, it still requires an attachment to a "screen."

But the phone use may not be the only concern for many parents. The video game uses players' actual GPS on their phones to track their locations in order to identify nearby Pokémon and Pokéstops.

The GPS may be unsettling for parents, and in some cases, for good reason. NPR reported that a 19-year-old teenager, Shayla Wiggins, in Wyoming, was playing Pokémon Go in search of Pokémon and found a dead body floating in the water of the nearby Wind River. In another case, four men in their late teens used the app to track down players at a Pokéstop late at night and robbed them at gunpoint. The GPS function can be concerning, especially for young people who may not understand the full risks of sharing their location.

The app, developed by Niantic Labs, Nintendo and The Pokémon Co., boasts massive popularity with impressive numbers of daily active users. In a joint statement reportedly released to MarketWatch, The Pokémon Company and Niantic Inc encouraged players to be safe and alert:

We are aware that some incidents have occurred involving fans playing Pokémon GO. We encourage all people playing Pokémon GO to be aware of their surroundings and to play with friends when going to new or unfamiliar places. Please remember to be safe and alert at all times.

Like anything else, Pokémon Go, which is bringing massive Pokémon-enthused crowds together in cities across the world, requires user engagement. And that can distract children from being aware of their surroundings, especially outdoors. There are a lot of factors for parents to consider – and you've definitely gotta catch 'em all.