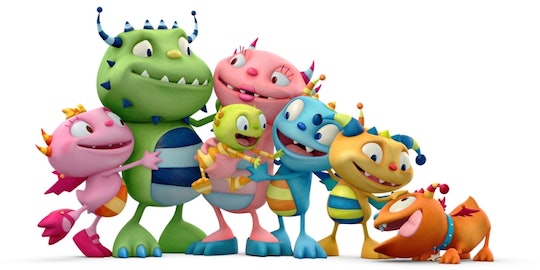 Already I love the cast of Henry Hugglemonster, because accents. I tend to trust anyone with a British accent, especially small animated monsters. This Irish-British-American 3-D animated production has become something of a hit since it first aired on Disney Junior in Britain back in 2013. Now Henry and his crew from Roarsville are making waves on this side of the pond, but should your kids watch Henry Hugglemonster?

The show has been getting some pretty positive reviews from parents and critics alike. Henry Hugglemonster has been nominated for a Daytime Emmy for Outstanding Preschool Animation and the folks at Common Sense Media gave the show four stars, saying;

Henry Hugglemonster offers preschoolers a delightful hero who's always up for adventures and never misses a chance to learn something new. As a middle kid in his family, Henry always has feelings to share with his viewers, and his interactions with his parents, siblings, and friends model positive communication and relationships for tots.

The show is based on the children's book, I'm A Happy Hugglewug by Niamh Sharkey. It focuses on a 5-year-old monster named — you guessed it — Henry Hugglemonster and his family. Henry has a best friend named Denzel Dugglemonster and a "monsterette" friend, Gertie Growlstein, of the Fifth Avenue Growlsteins (just kidding). There is a large cast of supporting characters and the show stays pretty energetic and upbeat from beginning to end.

Henry Hugglemonster seems like a pretty safe bet for parents with little ones. Henry and his extended family (brothers, sister, grandparents, etc.) are a genuinely wholesome bunch of monsters who do things like set up Hugglejuice stands and put on shows for the neighborhood. But what is the real test of a good kids show, you might ask?

The truth is, you could do a whole lot worse than spending an afternoon watching Henry Hugglemonster with your little one. And it is the one truth we slowly learn about parenting: All of those lame things you mocked people before pre-kids (being tired, losing interest in pop culture, wearing questionable clothing) becomes a happy reality post-kids.

So give yourself a break; you know you want to just hang on the couch and catch Harry Hugglemonster with your little one. It's the parenting version of Netflix and chill.