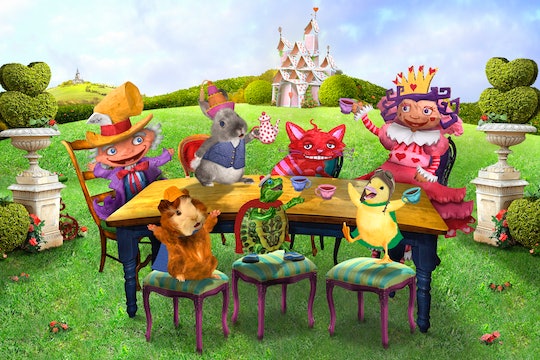 Should Your Kids Watch 'The Wonder Pets!'? This Show Is All About Team Work

There is a Holy Grail for parents of young children out there. It can be described like this: finding a television show to watch with your kids that keeps them engaged but doesn't make you want to gouge out your own eyeballs. So, while some parents might be wondering if their kids should watch The Wonder Pets!, perhaps another question might be; will you be able to watch The Wonder Pets! along with them and not lose your mind?

The answer is, yes, I think so. And I know this because I watched more than one episode all by myself as a grown up woman, hunched over my computer. I watched The Wonder Pets! save a black kitten in a Halloween episode, and save poor, unfortunate Humpty Dumpty in another episode. Yet here I sit, still (somewhat) sane. Friends, I think we've found ourselves a winner!

The Wonder Pets! was created by Josh Selig and debuted back in 2006 on Nick Jr. and became a pretty instant success. The show follows three elementary class pets (Linny the Guinea Pig, Ming Ming the Duckling, and Turtle Tuck). The pets are called to rescue some sort of animal from very tame danger in each episode and have to work together, each bolstering the other to be courageous, be careful, or be kind.

And here is a whole episode for you to watch for your own benefit.

The show employs a type of animation called "photo-puppetry" that is colorful and appealing, creating characters that are close to lifelike. Children will appreciate the "almost-realness" of the animals, not to mention that nearly all of the dialog is sung, operetta-style. But parents, take heart; the singing is sort of sweet and cute, not grating. I won't mention the myriad of children's shows I had to sit through where the singing was like nails down a chalkboard... but I digress.

For kids, I think the blend of magic (animals coming to life once the people have disappeared) and real life (animals that need to be rescued, homes and yards that could look much like their own) is a palatable combination they enjoy. One of the small issues might be the "baby talk." The Wonder Pets! is aimed at young children who are working on language skills. Ming Ming the Duckling's affected lisp might lead children to imitate the pattern, though there's obviously no evidence that that would happen. Alternately, hearing the different speech pattern might help children learn that lisps are totally normal and they should be accepting people who speak that way.

For the most part, The Wonder Pets! is a pretty safe bet for kids and parents alike. So if you feel like you could use half an hour to just sit and snuggle up on the couch with your little one, feel free to tune in. You could do worse.