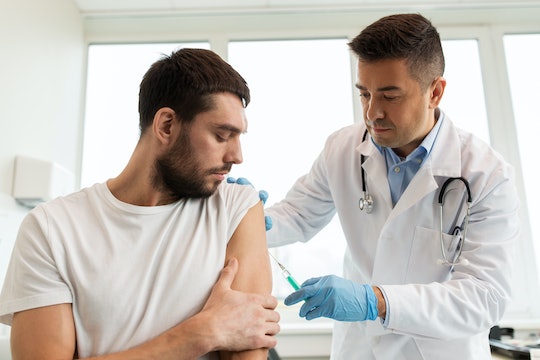 If You're Pregnant, You're Not The Only One Who Needs A Flu Shot — Your SO Does, Too

I get it, it's absolutely no fun to get a flu shot. It hurts and your arm is tender for days afterwards. There's also the matter of going to the doctor and getting it done. I know I hate going to my doctor. She weighs me every time, which I hate, and her office smells like disinfectant and orange essential oils. But I still go. Especially when I'm pregnant, I make sure to get my flu shot. But should my husband? Should your partner get the flu shot if you're pregnant, or is it enough that you're inoculated?

According to the Centers for Disease Control and Prevention (CDC), last year more than 100 children died due to complications from influenza. That's the most since the swine flu epidemic of 2013 to 2014. On average, noted the CDC, between 37 and 171 children die each year from the virus. Most infants who succumb to diseases like pertussis and influenza contract the virus from someone in their home — a parent, a sibling, or a visitor, noted the March of Dimes. That's why it's so important to make sure that anyone who is likely to come into close contact with your child receive the flu vaccine. Ideally, relatives should get the vaccine before the baby is even born.

Also, it's proven that women who are pregnant are more likely to get the flu than women who aren't pregnant, and because of their immunocompromised state, the flu is often more severe and harder to treat, according to Nature Microbiology. So it's especially important for partners to get the flu shot as soon as it becomes available to help protect not only their children, but also the mothers of their children.

If you've ever had the flu, you know how ungodly awful the symptoms are. High fever, sore throat, muscles that feel as though they're bowstrings strung too tightly — imagine a baby trying to fight off that illness. Especially a newborn. They can't communicate to you how they're feeling or if the treatment is helping. All they can do is cry and get sicker. No parent wants to feel the weight of that guilt that they're the ones who brought this suffering down on their own child. It's one of those unimaginable things that suddenly becomes very real when it happens to you or your child. Infants are a vulnerable population who cannot yet get the flu vaccination because their little systems cannot handle the immune trigger created by the vaccine.

We all know the controversy surrounding vaccines. However, they've all been completely and totally debunked. Here's a few facts about the flu shot straight from the CDC to convince you and your SO that it's totally necessary. First, it's not made from a live virus. It's made from a grown virus that is no longer living by the time it's injected into the muscle of your arm. The nasal spray is a live virus and it's no longer the vaccine of choice. Secondly, the flu shot does not — I repeat — does not give you the flu. If it gives you flu-like symptoms, that's an immune response to the shot, not the flu itself. Third, while it is possible to get the flu if you've been vaccinated against it, it's far less likely you will, and if you do get it, you'll likely be less affected by the flu than someone who didn't get the shot. Fourth, it is not loaded with mercury. In fact, that spicy tuna roll you just ate has much more mercury than any vaccine.

While it's by no means a panacea and you still need to practice strict hygiene procedures while you're pregnant (and any time really), the flu vaccine is a safe, effective way to protect yourself and your loved ones this season.

More Like This
What Does Amniotic Fluid Smell Like? A Nurse Explains
Here's How To Keep Your C-Section Incision Dry
What NICU Means & What To Expect From A NICU Stay
New Report Shows 80% Of Pregnancy-Related Deaths Are Preventable