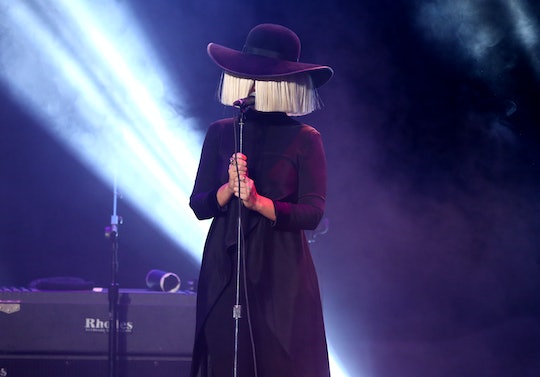 There really couldn't be anytime that wouldn't be perfect for Sia's new song "One Million Bullets" to drop, but considering that the world is an especially heinous hell-hole right now, I'm thankful for any opportunity to find four minutes of escape. "One Million Bullets" — like "Bird Set Free" and "Alive" before it — is the latest Sia single (trying hard not to call it a "Siangle") that was originally written for Adele before ultimately being passed back to Sia, who would go on to record and release it. (Yes, it is really fun to think about two basically perfect singer/songwriters emailing back and forth about who is going to release which amazing song. No, I have no idea if that's how any of that went down at all, but I choose to believe it.)

"One Million Bullets" appears on Sia's forthcoming new album This Is Acting, which is scheduled to be released on January. The newly released song marks the third track from the album that we've had a chance to hear thus far (the others are "Alive" and "My Arena".) This Is Acting, according to what Sia told Ryan Seacrest, wouldn't just feature song that were originally pitched to Adele, but tracks penned for other artists including Rihanna, Beyoncé, Katy Perry, Demi Lovato, and Shakira — an awesome reminder that Sia isn't just the keeper of one of the most emotive and distinctive voices in the game, she's an absolutely incredible songwriter too.

So, sure, it's nice to hear the song, but a Sia song isn't a Sia song these days without a life-changing video to go along with it — hearing this new single, as lovely as that is, feels almost incomplete without a new hyper-talented child dancer to get obsessively jealous of (and again, and again), or a polarizing B-list celebrity to suddenly feel uncomfortably favorably about. Hey, I don't want to be demanding (seriously, I have been wildly in love with Sia since I heard "Sunday" on Grey's Anatomy in 2005, bought Colour The Small One, and never looked back; my devotion is irrevocable and not dependent on the videos that have defined "second-wave Sia.") but come on... where's that video?