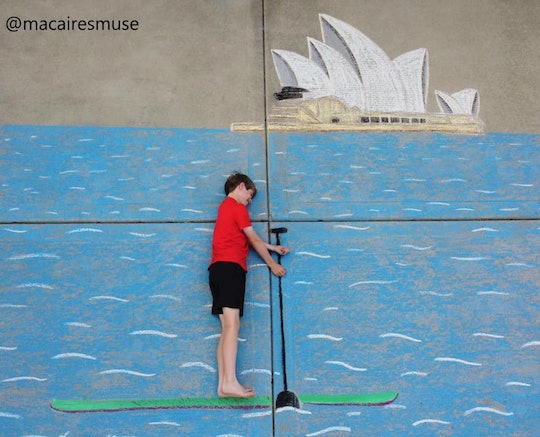 Macaire Everett and her little brother Camden were excited about heading to the beach for spring break this year, but the coronavirus pandemic, of course, threw a wrench in their plans. But instead of sulking, these siblings created 100 days of chalk art to travel the world during quarantine. After all, as 14-year-old Macaire tells Romper, they figured they might as well "preview our travels since we can't go anywhere right now."

Christine Everett of Libertyville, Illinois tells Romper that her two kids, teen daughter Macaire and 9-year-old son Camden, have always been close. "[Macaire] always wanted to care for him as the younger brother," she says. And when the coronavirus pandemic hit in March, forcing families to quarantine at home together, her kids really turned their sibling bond into something beautiful.

According to Macaire, she and her brother, like a lot of kids, were simply bored while they were cooped up at home. "I feel bad saying that," she tells Romper, "but we were really bored." As for Camden, he says he was "really sad" that his family couldn't go on their spring break vacation to Florida.

With the majority of the country on lockdown, a trip to Florida was not in the cards. So the family came up with an idea: Why not use up some of the leftover chalk in the garage and create some adventures on the driveway? Adventures drawn by Macaire and shared to her Instagram account @macairesmuse feature Camden just living his best life... whether he's bullfighting in Spain or scuba diving in the ocean.

They created daily chalk art on their driveway of their cul-de-sac home back in March and have kept it up. On the Fourth of July, they created their 100th work of art, Camden standing in front of the Statue of Liberty holding an American flag while fireworks went off in the background.

Everett tells Romper that the family sat down at the beginning of quarantine to come up with ways to come together as a family, and this venture has proven to be just what the doctor ordered. "Every day Camden plays outside while Macaire draws and then he comes over to get his picture taken," she says. "It's perfect because they can be separate and together."

All while coming up with their dream holidays. Taking to the pavement to see places they hope to visit in real life some day: Paris, Venice, Australia, the United Kingdom, and beyond.

Macaire might be the artist, but she tells Romper the whole family gets involved in the process, including Camden. She says he has his own requests, like when he wanted to be jumping rope or riding a dirt bike. For Camden's part, he says his favorite chalk art was scuba diving. "I've never gone in the ocean," he says. "Some day I want to go to Hawaii."

While Macaire and Camden live out their holiday "preview" on the pavement, they've managed to develop a nice following of people who appreciate their work. Macaire's Instagram page currently has over 12,000 followers. Locally, Macaire says neighbors and friends have started to come by every day to see the new artwork, while local businesses have been donating chalk since she goes through "about 20 pieces per drawing."

Macaire and Camden's mom tells Romper the support online has been "really encouraging." "Just to have people who they’ve never met telling them they enjoy their work is so special," she says.

Now that the kids have hit their goal of 100 days of chalk art, they're still going to keep at it. "Just not every day," Macaire says. "I really like art, but I like other things as well." That's called balance.